The Truth and Reconciliation

The Truth and Reconciliation is the third campaign level in Halo: Combat Evolved. The Master Chief and a team of Orbital Drop Shock Troopers must rescue Captain Keyes, who is being held prisoner aboard the Covenant ship, the Truth and Reconciliation. After boarding the ship by using its gravity lift, the Master Chief fights his way through the interior of the Covenant battlecruiser to rescue Captain Keyes and several other prisoners from the ship's brig. This is the first level in which Mgalekgolo, Sangheili Zealots, and Stealth Sangheili are encountered.

Echo 419 arrives at the plateau.

The view pans across a plateau with a Covenant Ket-pattern battlecruiser above it.

Pelican Echo 419 comes into view, it starts to land.

The Pelican lands in an unoccupied area.

Fire Team Charlie and the Master Chief get off the Pelican and head forward.

The Master Chief takes out as many Covenant troops as he can, before being spotted by the Covenant, who open fire at him.

One of the Unggoy runs for a Shade turret.

More Covenant troops enter the area, but are eventually all eliminated. The area is secure.

The Chief starts to move up the slope.

As Fire Team Charlie move further up the plateau.

If the Chief takes the left flank:

If the Chief moves up the middle:

As the UNSC forces takes out the last of the Covenant infantry, a Spirit dropship lands nearby and drops a lance of Covenant.

After clearing the area, they walk through a path and reach the cruiser's landing zone, which is defended by a number of troops.

If three or more ODSTs from the team are killed:

The team engages the Covenant defense, while Echo 419 enters the landing zone and drops another team of marines.

Another Spirit approaches, dropping a group of Unggoy

The team eliminates all Covenant resistance, including a pair of Mgalekgolo.

The ODSTs gather under the grav lift.

If any of the Marines are KIA:

Marines exiting the Pelican greet the Chief before taking position around the lift.

Into the Belly of the Beast[edit]

John-117 and his Marine squad boards the gravity lift.

The Master Chief looks around as the Marine begins to hover into the air.

After all the Marines ascended into the ship, the Chief looks up and begins to hover upwards.

The team find themselves at the cruiser's cargo bay. No Covenant troops are present.

The Chief and the Marines fight off multiple waves of Covenant reinforcements attacking from all sides. After the last wave has been defeated, a pair of massive blast doors open to reveal a few Kig-Yar (or a pair of Mgalekgolo on higher difficulties). The team eliminates them.

The team exits the cargo bay through the open doors the Kig-yar (or Mgalekgolo) came through. They head down the corridor but are stopped by a second set of blast doors:

The Chief goes alone and makes his way through the corridors, eventually reaching a balcony overlooking another cargo bay.

The Chief makes it to the ground level and opens the door, letting the rest of the team inside.

Covenant troops enter the cargo bay, attempting to fend off the boarders, but are soon eliminated.

The team soon enters a large docking bay just in time to witness a Spirit dropship taking off.

If three or more Marines are dead:

The Chief and the rest of the team go around the docking bay, battling multiple waves of Covenant.

The team reaches the door on the other side, but the door is locked.

More Covenant, including another pair of Mgalekgolo, enter the shuttle bay, but are eliminated soon.

The Chief leads the team up to the second level.

If every Marine on the team is dead:

The Chief disengages the energy shield over the bay doors.

The Chief leads the Marines up to the third level. The team eventually reaches the ship's bridge and kills all the Covenant forces inside, including the Shipmaster Lat 'Ravamee.

The Chief heads off alone to rescue the Captain. He makes his way through corridors, and comes across an empty brig. Some of the holding cells have dead Marines in them.

The Chief exits and comes across an occupied detention center:

The Chief kills all the Covenant guards, including two Stealth Sangheili and another Zealot.

The Chief opens all the cells. 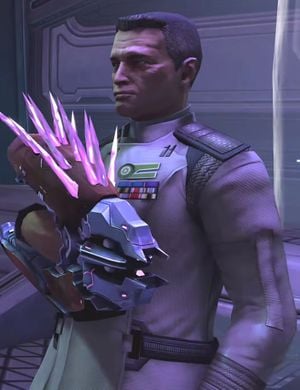 Captain Keyes arms himself and prepares to fight his way out of the Covenant cruiser.

The Chief helps Keyes to his feet.

Keyes and the Chief leave the cell. Keyes addresses the freed Marines.

The three freed Marines, each armed with a Okarda'phaa-pattern plasma rifle, assemble in front of the Captain.

The Captain picks up a fallen Needler.

Shut Up and Get Behind me... Sir[edit]

A pair of Stealth Sangheili armed with Plasma Rifles charge into the brig and the fighting resumes.

If Keyes dies at some point between here and the end of the level:

The game then reverts to the last checkpoint.

After fighting their way back to the bridge, the Chief and the others discover that Sergeant Parker and his squad have been killed by two Stealth Sangheili with Energy Swords (three on Legendary). The Chief and the rescued UNSC survivors kills the Sangheili.

The doors to the bridge open and a horde of Unggoy attack from all sides. The Chief and the others repel the attackers. The Chief then takes the Captain and the Marines back to the hangar.

They return to the shuttle bay, encountering a lance of Covenant, who are quickly dealt with. The Chief releases the dropship from the clamps or opens the shuttle bay doors on the floor below.

Hijacking a Spirit dropship, Captain Keyes and the Chief escape the Truth and Reconciliation.

The Chief presses the holographic buttons. The Spirit dropship shakes.

The Spirit dropship shifts and opens up its troop bay doors for the Marines.

A pair of Mgalekgolo exits the doors in front of the Spirit and takes aim at the dropship.

Keyes rams the two Mgalekgolo with the dropship.

The Spirit flies out of the hangar. Fade to black.

Paul Bertone, Jr. was the main gameplay designer for The Truth and Reconciliation,[1] while artists David Dunn and Paul Russel worked on the level as environmental artists.[2]

During the initial design, there were concerns for the Truth and Reconciliation model in the skybox due to engine limitations, and Jaime Griesemer believed the level would be split into two levels.[2] Early design of the level also involved a ramp the player would walk up to access the ship, intended to be low to the ground. However, the art team didn't want to have the player be able to inspect the ship up-close due to the low resolution of the in-game asset, so the gravity lift technology was conceived to to help provide the player with a way of entering the ship while keeping the vessel airborne. This idea proved to be more visually interesting that the level was structured around the gravity lift.[3] The gravity lift had also allowed Bertone to spawn in enemy reinforcements after artist Stephan Okasaki developed animations for Covenant troops being deployed from the lift. After his rescue, Captain Keyes was deliberately given a Needler, so players can easily locate Keyes without giving Keyes a high damage output.[2] A bug was present during the development in which Keyes had the AI behavior to "taunt enemy corpse". Being armed with the Needler, he would fire it into a dead Covenant soldier, which would explode and kill himself.[1]

There was a level cut from the final game that necessitated the exposition during cutscene in which the Master Chief frees Captain Keyes and the marines. According to Director of Cinematics Joseph Staten, the level, in a more elegant way, described the theory about Halo.[1]

In the initial release of Halo: The Flood, Master Chief was accompanied by a squad of Orbital Drop Shock Troopers led by a Sergeant Parker (who appeared in lieu of David Scully's Avery Johnson in-game). In-game, even in the Anniversary version of the level, the Master Chief is accompanied by Marines wearing regular Marine BDUs as opposed to their characteristic armor, which had not yet been established in canon at the time the novel was written. For example, Halo: The Flood describes ODSTs using eye-screens like regular Marines as opposed to full helmets.[4] Additionally, in The Fall of Reach and First Strike, ODSTs were only distinguished from regular Marines by the unit patches on their shoulders, as opposed to their conspicuously different armor as depicted in later media.[5][6] This was amended in the 2010 reprint, where the squad are referred to as regular Marines, as implied by their in-game appearances.

The Halo: Reach campaign level Nightfall would pay homage to The Truth and Reconciliation, featuring sniper combat and enemy territory infiltration during nighttime.[7] Similar to the Master Chief in this level, the Sniper Rifle given to Noble Six at the start of the level has more ammunition capacity than normal.