For other uses of the word Halo, see here.

Halo is the second campaign level in Halo: Combat Evolved. Set on the morning of September 19, 2552, it gives the player the first "on the ground" view of Installation 04. As the only survivor from the Bumblebee escape pod crash, John-117 fights against the marauding Covenant forces, while searching for and rescuing other survivors from the Pillar of Autumn. This is the first level in the game in which Kig-yar and Banshees are encountered.

The Bumblebee flies over a cliff, trailing smoke. Switch to John-117's point of view as he watches from inside as the craft heads towards the ground at an alarming rate.

A violent crash is heard. Fade to white.

All of the Marines sit dead on their chairs. A few of the bodies rest outside of the lifepod. Weapons and ammunition scatter around the pod's exit. The Master Chief exits the lifepod.

If the player heads to the waterfall's direction:

The Chief approaches the bridge, the only way deeper into the valley:

As the Chief reach the other side of the bridge, a Spirit dropship flies over him.

If the player lingers near the crashed lifepod:

A Covenant Spirit dropship lands and drops off a Covenant lance. Two Banshee fighters patrol the area. The Chief either eliminates or evades the dropped Covenant troops and proceeds through a canyon.

The Chief approaches a large structure where a group of stranded Marines are battling the Covenant. He assists the struggling Marines and eliminates the Covenant troops. Two Marines approach him.

The Chief heads behind the structure to deal with the Covenant forces.

The UNSC forces deal with the next wave.

If all of the Marines are dead:

If the player begin to leave the area:

After a few more waves of Covenant, a Pelican dropship appears from the cliffs.

The Pelican deploys its Warthog.

One marine stays behind to accompany the Chief. The other survivors get aboard the Pelican which takes off.

If the player walks away from the dropped Warthog towards the distant cave:

If the player explores the area on foot or delays for more than five minutes:

A Navigation point appears on the distant cave.

The Chief drives into the cave.

After navigating the tunnels, the Chief emerges in a large cavern, with a chasm dividing the floor into two halves. There is no visible way to cross. Covenant forces occupy his side of the cavern. He kills all the Covenant present.

The Chief ascends to a balcony, kills the Sangheili he encounters, finds a control panel, and activates it.

When the Chief engages the panel, four giant silver beam-generating structures extend across the chasm, and an energy bridge slowly fades into coherence.

(Note: The cutscene mentioned will not occur unless the player kills all of the enemies in the area. However, the energy bridge will still activate in gameplay.)

The Chief crosses the bridge, and navigates through more tunnels.

The Chief arrives at the exit to the cave. 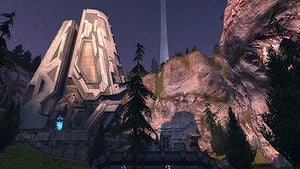 A beam emitter in one of Halo's valleys.

The Chief approaches the rock slide crash site. There are up to seven Marines that can be saved there.

If the Covenant charges into the rocks:

Marines will all get on top of the highest rock, where the sniper is.

If the player leaves the area before evac arrives:

The Chief fends off a few waves of Covenant forces.

This line changes to reflect which two pods the player haven't yet found:

If all of the Marines are killed:

If the player dawdles:

The Chief makes his way up into the hills where the four live Marines are.

The Chief defends the survivors from more waves of Covenant drop ships.

If all Marines are killed: 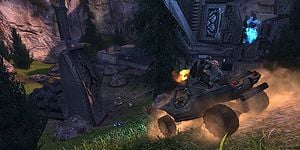 The Chief engages Covenant infantry on a Warthog.

The Chief leaves the second lifeboat, searching for the third and the last lifeboat.

The Chief approaches a lifeboat near the river. There are no bodies nearby.

The Chief crests a hill and sees a structure on the cliff's edge.

If the player leaves the area before finding the survivors:

If all of the Marines and techs are killed:

If there are still Covenant in the area when the player emerges from the structure:

The Chief mops up the last of the Covenant in the immediate area.

The Chief climbs on board the Pelican.

Echo 419 evacuates survivors from the valleys of Halo.

Echo 419 flies away from the area.

Art Director Marcus Lehto led the art design of the campaign level Halo. Lehto cited Snoqualmie Falls in Seattle as a major inspiration for the level's natural landscape, especially the first waterfall upon exiting the lifeboat.[1] The second half of the level was inspired by the terrain seen in the MacWorld Halo announcement trailer. According to Paul Bertone, the level design determined the direction for the game engine, which needed to support the wide-open terrain and high density of gameplay. Artist Chris Lee modelled the beam emitters seen throughout the level. Designer Jaime Griesemer was responsible for the level design.[2]

Jen Taylor, the voice actress of Cortana, also voiced the lifeboat pilot at the beginning of the level.[3]

Cortana's line "This cave is not a natural formation" is ridiculed by many members of Bungie and many fans due to its blatant obviousness.[3] Originally, the cave to which Cortana refers looked natural, though Cortana could tell that it was not; due to time constraints, the cave was changed to look artificial near the end of the level's development, and the line was kept.[1] (Ultimately, the line would be ridiculous regardless of how the cave looked; since it was located on a clearly artificial megastructure, no geological features upon its surface would be natural.) The statement serves as the namesake of a chapter title in the Halo: Reach level The Package, in which Noble Team retrieves a fragment of Cortana from a subterranean Forerunner complex. The dialogue would be referenced in other Microsoft games. In the Gears of War 2 level Disturbing Revelations, upon approaching a subterranean Locust structure, Dominic Santiago says, "I think it's safe to say that's not a natural cave formation." In Forza Horizon 4, upon approaching a tunnel in the Pillar of Autumn showcase race, Cortana says, "This cave is not a natural formation."

In addition to introducing M. Fitzgerald as the Marine manning the Warthog dropped off by Echo 419, the release of Halo: The Flood has also introduced two minor discrepancies into the canon:

Designer Paul Bertone considered this level as the iconic Halo level which defined the sense of mystery and explorative feeling.[2] The environment of this level would be referenced in the later games. The environment of this level served as inspiration for the Halo 3 multiplayer map Valhalla and Halo: Reach map Forge World, both of which featured similar terrains with beam emitters and waterfalls. Valhalla was also remade into Ragnarok in Halo 4. Furthermore, the cliff edge section of this level was recreated as the Firefight map Installation 04 in Halo: Reach Anniversary Map Pack. In Halo 5: Guardians, the Forge canvas Alpine also featured a similar terrain. Justin Dinges, the Campaign Art Lead on Halo Infinite, cited the Pacific Northwest forest biome as an inspiration for the environment on Installation 07, but noted the biome was chosen as "a deliberate ode to the past" in an allusion to the environment in this Halo: Combat Evolved level.[4]