This article is about the Halo: Anniversary Firefight map. For other uses, see Installation 04 (disambiguation).

Installation 04 is a Firefight map included in the Anniversary Map Pack for Halo: Reach. The level is based on the cliff edge section of the campaign level Halo from Halo: Combat Evolved. Friendly AI — ODSTs — will aid the player in both solo and cooperative play; this is the first time that friendly NPCs have appeared in a Firefight map.

Set on one of the many cliff sides of Alpha Halo, this beacon served as a rendezvous point for survivors of the Covenant attack on the UNSC Pillar of Autumn. These survivors, including the legendary Orbital Drop Shock Troopers, were forced to stave off numerous Covenant attacks until rescue finally came.[2]

The following are locations on the map that are so named on the player's heads-up display during gameplay: 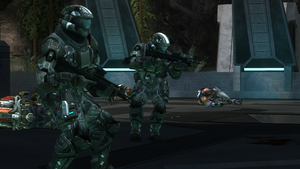 Installation 04 is the first and - to date - only Firefight map to contain friendly AI alongside enemy counterparts. These allies take the form of a squad of four Orbital Drop Shock Troopers. The ODSTs spawn in the top of the structure and will not leave unless pushed off, or the difficulty is set to Easy. ODSTs will only enter vehicles such as the Warthog when the Warthog is spawned in via D77-TC Pelican dropship. Elite players in Firefight Versus are unable to perform assassination animations against the ODSTs; they can only perform the traditional one-hit kill from behind.