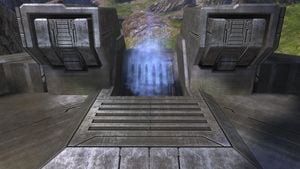 A man cannon on Valhalla.

A man cannon, more formally referred to as a conveyor lift,[1] is a device that launches an individual or object through the air over a long distance.[2] In the case of human-built man cannons, this is typically accomplished by means of some form of air vent or jet thruster, whereas Forerunner or Covenant man cannons commonly employ more sophisticated technology, such as anti-gravity emitters similar to that used in gravity lifts.

Although they come in various designs and configurations, man cannons typically resemble air vents which emit a stream of exhaust that applies a strong force to anything that enters it. The distance an object is launched depends on the mass of the object and the strength of the cannon; human-sized objects will usually be catapulted many yards, while heavy vehicles and other large objects have considerably shorter trajectories.[3][4]

The man cannons were introduced as gameplay objects in Halo 3, and returned in Halo: Reach, as well as in Halo 4. In many maps, they replaced teleporters as a means of quickly moving across long distances, similar to how gravity lifts propel the player over a vertical span.

The user is unprotected while in mid-air, but can still attack other players. The danger of using the man cannon is that the user's trajectory is set when they enter. Since the person being propelled through the cannon does not have a lot of air control, an enemy sniper will be given a good amount of time (the main man cannon on Valhalla takes around 2.5 seconds from 'take-off' to 'landing') to estimate where your head will meet his crosshairs. It also adds some advantage, as this player still can attack the other competitors. The player also has a quick overview of the positions of enemies and the current battle situation.

As of now, man cannons have only been featured by default in the Halo 3 multiplayer maps Valhalla, Guardian, Narrows, and Avalanche. They also appear as a placeable object via the Forge in almost any other multiplayer map.

The man cannon has only appeared in Halo 3 as an environmental feature in 4 maps so far, but a placeable version of the man cannon can be placed manually in Forge on Rat's Nest, Foundry, Standoff, Avalanche, Cold Storage, Sandbox, Longshore and Citadel, although in other maps a grav lift could be used to similar effect, albeit not as powerful or directional.

This placeable version produces roughly the same amount of motive force, but can be placed anywhere on the map and in any position. This gives users great creative potential when using the man cannon in Forge that can be utilized to produce maps with better gameplay than would otherwise be possible. The man cannon is also an object which is immovable during normal gameplay after being placed in Forge. Unlike the small portable gravity lift, the man cannon cannot be destroyed. Until Halo 4, all placeable man cannons were Covenant ones, but Halo 4 features human-made man cannons.