From Halopedia, the Halo wiki
(Redirected from Bubble Shield)
Jump to: navigation, search

Were you looking for Drop shield?

The Z-4190 Temporal Protective Enfolder/Stationary Shield (Z-4190 TPE/SS),[1] commonly referred to as the bubble shield, is a personal defense device. It is Forerunner in origin, but the United Nations Space Command's Office of Naval Intelligence manufactured a number of the devices based on discovery of those formerly used by Warrior-Servants.[1] Even the Covenant reverse-engineered crude copies based on captured ONI prototypes. 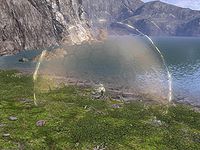 The Covenant's version of the bubble shield created a gold, dome-like protective area for approximately 20 seconds when activated.

Historically, the ‘dissipative’-style deployable energy shield system of the bubble shield is Forerunner in origin. Warrior-Servants utilized such a system to generate temporary fortifications using a sphere of interlocking hexagonal force enfolder elements,[1] similar to those used by Sentinels and Protectors. The technology was eventually discovered by ONI in the twenty-sixth century and was repurposed for use by the UNSC Armed Forces in the Human-Covenant War. In 2544, Spartan-II Blue Team used a bubble shield during Operation: WARM BLANKET.[4] HRUNTING/YGGDRASIL Mark I ADS suits utilized a form of bubble shield for protection.[5] Due to their size, mass, and relatively short power cell duration, along with low rates of production, Bubble Shields saw very limited use during the last stages of the Human-Covenant War.[1]

The drop shield is an advanced iteration of the bubble shield that was developed by the Materials Group for ONI's Beta-5 strike teams. Drop shields saw usage during the Fall of Reach.[6] After Reach was defeated, Covenant forces recovered and copied ONI's shield prototypes, later employing their own cruder versions of bubble shields during the Battle for Earth and Battle of Installation 00.[7] These bubble shields projected a translucent, slightly white/gold tinted protective sphere around the user. The shield itself was similar to a geodesic dome, made of tessellating hexagons. The shield protected against bullets, explosions, lasers, plasma, flames, grenades, and other projectiles. Vehicles and personnel, however, were still able to pass through it. After approximately 20 seconds had passed, the shield would collapse and the generator would self-destruct. After the conclusion of the war, the Office of Naval Intelligence continued to manufacture a small number of similar devices, until 2555, when it refocused its shield research efforts towards Mjolnir-compatible emitters.[1]

During simulations of the Battle of Installation 03 and Battle of New Phoenix a Spartan-IV utilized a version capable of allowing the user to fire weapons at targets while remaining inside the shield.[8] On January 21, 2558, SPARTAN-G059 deployed a bubble shield against Avu Med 'Telcam to block his Type-51 carbine's rounds during her assassination mission.[9] Both UNSC and Banished forces utilized bubble shields with infantry and vehicles during their battle over Installation 00 in April 2559.[10]

In the campaign of Halo 3, Brutes deploy bubble shields often. At least one or two Brutes in a Covenant pack always have a bubble shield on hand. Brutes generally activate their bubble shields immediately when taking fire or when feeling threatened. Unlike the multiplayer "shield doors", vehicles are able to pass through the bubble shield. Damaging the shield generator itself in the bubble's enclosure will cause it to explode, and the shield will collapse upon detonation. Upon reaching its energy limit, bubble shields will make a high-pitched sound prior to overloading and exploding. In Halo: Spartan Strike the bubble shield can be used repeatedly with a duration of 8 seconds and a cooldown of 24 seconds.