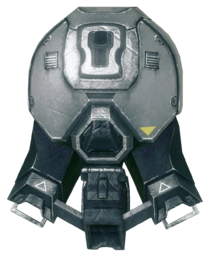 Edward Davis: "Too bad we don't have jetpacks."
Sarah Palmer: "Maybe we should ask. Could be a thing."
— Edward Davis and Sarah Palmer[1]

Jetpacks, thruster packs, jump packs and jump-jets, are personal propulsion device. Jetpacks give individuals limited flight capabilities, both inside and outside of gravity-intensive environments. Jetpacks are used by various species, including humans, Sangheili, Kig-Yar, Jiralhanae, and occasionally Unggoy.[2]

Thom-A293 equipped with a jump-jet.

As part of their standard training, all personnel of the UNSC's Naval Special Weapons and Special Warfare Command are required to learn how to operate with jetpacks.[2] Likewise, all UNSC Navy and Marine Corps personnel are trained to become familiarized with jetpacks in microgravity environments. However, only Spartan supersoldiers and certain UNSC Special Forces units—such as the Orbital Drop Shock Troopers or operatives of ONI's Delta-6 Division—are trained to use jetpacks in an atmosphere. This training is often referred to as "jump pack training". Safety considerations are considered very important during jetpack training, especially for non-augmented personnel; without the encumbered of armor weighing half of a ton, some users can easily miscalculate the height and speed they are able to attain.[3] The UNSC has developed jump jet safety restraints and gravity mitigation harness linkages to be used with certain jetpack models.[4] Thrusterpacks are usually not well protected and the worn by James-005 during the Fall of Reach exploded when hit with projectiles from a Needler, causing him to tumble into deep space and subsequently lose contact.[5]

Jetpacks are often used by specialized units, such as the ODSTs' Bullfrogs.[6] The UNSC commonly uses jetpacks for extra-vehicular activity operations, such as ship repair by specialized technicians and welders.[7] The new versions of the second generation of the MJOLNIR Powered Assault Armor used by the SPARTAN-IVs features an integrated set of thrusters, but jetpacks are still used to give the Spartans full maneuvering capabilities. Lethbridge Industrial's Series 12 SOLA jetpack is the standard jetpack unit following the Human-Covenant War, featuring integrated fly-by-light controls.[3]

The Covenant equipped specialized infantry units with jetpacks to aid them in combat. Sangheili and Kig-Yar Rangers of the Covenant Fleet Security division were normally equipped with jetpacks to allow them to carry out extra-vehicular activity missions and other operations that required extensive vertical mobility.[2] The jump packs used by Jiralhanae Jumpers were not capable of true flight, although they allowed its users to propel themselves to great distances.[8] The Unggoy Rangers of Jul 'Mdama's reformed Covenant faction were deployed with limited thruster packs seemingly capable of only short bursts.[9] Floatfighting referees were equipped with jetpacks to help them navigate around the Combat Section of the Ussan Refuge.[10]