Snowbound is a medium-sized multiplayer map in Halo 3.

The planets in the sky.

Snowbound is set in a snowy Forerunner area with two large Covenant bases at either end of the map. The two bases are joined underground by a cave, revealing a deep network of Forerunner structures underground. The planet the map is set on is a former Forerunner world controlled by the Covenant, not far from human-occupied space.[2] On the horizon, two celestial bodies can be seen. The Covenant base is surrounded by a perimeter of Shuku-pattern sentry turrets that fire upon anything in range.

Snowbound is a medium-sized, semi-symmetrical map with two bases. The bases, known as High Base and Low Base, are connected by an underground tunnel network. Much fighting takes place in or around the shield doors found inside the bases. Rocky outcroppings are located along the southern and western edges of the map (Rock Side); Shuku-pattern sentry turrets prevent players from exiting the map via its otherwise-unblocked northern and eastern edges (Tundra Side). When players venture too close to the map's boundaries, an alarm sounds, warning them to return to the bases before the turrets open fire.

High Base is commonly referred to as "Sniper Spawn" or "Carbine Base" due to the carbine and beam rifle it contains. Behind the base, players can find a battle rifle or a Okarda'phaa-pattern plasma rifle around the rocky terrain. A Mauler lies to the north of the base, and an overshield to the south. Inside, there are two plasma rifles, a beam rifle, and a power drain. On top of the base, there is a plasma pistol and a pair of plasma grenades.

Entering the Ice Cave from the Bases or the Ice Cave Tunnel is extremely risky. The main entrance is very defensible, as it affords the player with a full view of the cave's three most-used entrances and its shield door provides protection. Above the Ice Cave's main entrance spawns a Brute Shot (top), as well as a Spiker to the west and a Mauler to the east. An often seen tactic on this map is to hide on the other side of a shield door with the shotgun or Mauler and kill players as they pass through. 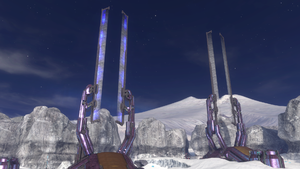 The antennae on the two bases.

Boundless. Note the lack of a shield door on the base.

Boundless is a map variant released to improve the gameplay balance, specifically as a response to reports of widespread shotgun-camping near the Shield doors.[3] It was due to be released on September 16, 2008, along with TU2, but was delayed until September 23, 2008. Like Sand Tarp and Epilogue, it is included as a default map variant in Halo: The Master Chief Collection. The following is a list of changes made;

This map, along with a few others, were originally supposed to feature Shade turrets and deployable lookout towers. They were removed in the released version, though tags for these Forge items still exist within the map's base coding.