"Recoil isn't as bad as you might expect, but not because of any sophisticated dampening system – it's because the damn things weigh so much."
— Anonymous UNSC Serviceman

A blueprint of the Spiker in Halo 3.

A blueprint of the Spiker in Halo: Reach.

The Type-25 Carbine is an automatic projectile weapon designed and used by the Jiralhanae, and has seen very little iteration since it was first designed and implemented during pre-Covenant conflicts on Doisac[4] though it has seen augmentation to some degree by Covenant technology.[1] The Paegaas Workshop variant was created by the eponymous clan workshop and manufactured on a large scale by the Sacred Promissory.[3] In the Covenant arsenal, it is one of the weapons most resembling those developed and employed by humanity, firing a solid metal projectile as opposed to plasma . The Carbine fires long, sharp projectiles made of superheated tungsten alloy,[4][Note 1] which give the weapon its common label of "Spike Rifle" or "Spiker".

Although the most common spike rifle variant employed during the Covenant, the Paegaas design is not the only one; the Banished are known to use the Grenflekt variant of the spiker developed by Mistrach'an Armory.[7]

A Marine is pinned to a wall by a spike impact, which pierced and went all the way through his arm and embedded in the wall behind, requiring the spike to be cut in half to allow the Marine the ability to move again.[8]

The spike ammunition is coated with a pyrophoric compound unique to Doisac,[2] though the weapon's origins on the Brute homeworld obfuscate any further attempts to ascertain the composition of the weapon.[1] When fired, the coating burns with a white-hot intensity once exposed to atmospheric oxygen,[2] rendering the spikes superheated and semi-molten.[2] The spikes thus glow with a yellow-white light for a short time after impact, before they cool. Even Jiralhanae do not attempt to handle spike rounds without protective gloves.[2]

These projectiles decrease in altitude the further they are shot, similar to the Needler. The are capable of piercing armor and flesh, in some cases even capable of pinning a target against an object behind them.[8] When fired directly at a surface, the spikes will embed themselves in most substances including concrete and metal, crumpling on impact. However, when fired at an angle, they are capable of ricocheting.[5] The spikes are large enough that they can be pulled out of the target's body with seemingly minimal fragmentation.[8] Spikes fired by the weapon are adept at penetrating energy shielding, and are also capable of being blocked by an energy sword.[9]

The Spiker's ammunition is fed into the weapon via a small drum magazine with a 40-round capacity,[5] though this is not standard across all version of the weapon.[4] The drum magazine is located on the underside of the weapon, behind the blades and in front of the trigger. These magazines are sealed and disposable, additionally holding a power supply for the weapon alongside the ammunition.[2] Like all Jiralhanae weaponry, the Spiker has no safety and once the magazine is loaded, the weapon is ready to fire.[2] The spikes, once-fired, are longer than the magazine, implying the firing process possibly stretches the projectile in some manner.

When employed, the Spiker is noted to have a distinct smell of burnt hair, with a telltale sign of their use in a firefight being the smell of "barbeque gone wrong".[5]

Two large blades made of tungsten alloy,[5] an extremely strong and durable material, are mounted under the barrel of the weapon, allowing it to be used as an effective melee weapon in close quarters. When used by Jiralhanae, these blades are intended for puncturing and dismembering[4] and are capable of clean severing a human arm.[5] These blades are, however, also effective as a psychological tool against anyone unfortunate enough to go against them.[4]

The Spiker was engineered by the Jiralhanae as a weapon intended to be held in one hand by a standard Jiralhanae soldier, though its size and weight mean it must be carried in two hands for use by human infantry.[6][10][11] The weapon's weight also has the effect of reducing its recoil, such that it has almost zero "rise".[5] Despite this, a SPARTAN-II and Sangheili is capable of dual-wielding Spikers with the help of powered exoskeleton .[10] The Spiker has a simple key ring trigger, though the pull weight can be an issue for un-augmented personnel.[2] The Type-25 Carbine is noted to perform admirably in a wide variety of environments; it is a widely held belief that the weapon could sit unattended for several weeks in an active latrine and still operate as issued without maintenance. The Spiker's barrel is 25.4 centimeters (10 inches) long.[5] The Spiker has a low muzzle velocity, but is incredibly accurate and retains its power nonetheless.[1] The weapon has several lights around the weapon that can be powered on, and have been observed in blue and orange colouration. 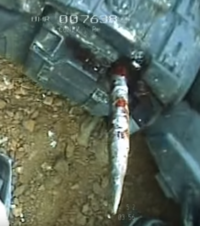 A spike round stuck in S. Hartley during the Battle of Sector Six.[8]

The Spiker was first encountered by UNSC forces when used by Jiralhanae forces during the initial skirmishes on Harvest in 2525,[12] and would remain a staple weapon of the Jiralhanae and the Covenant's shock troops[13] throughout the Human-Covenant War. The Type-25 Spiker was detested by the Sangheili due to its primitive origins, but the weapon was allowed to be serviced in low numbers[14] and even augmented with Covenant technology.[1]

Despite this, however, it would be rarely employed by front-line Covenant infantry during the war - only rising to prominence in late 2552 following the return of Jiralhanae as front line troops.[1][5] The weapon would be employed by Jiralhanae forces during the Siege of New Alexandria and Battle of Asźod during the Fall of Reach,[15][16][17] before later being employed during the Battle of Earth by the Fleet of Sacred Consecration and Jiralhanae reinforcements sent by the Prophet of Truth to Mombasa.[11][18] Following the outbreak of the Great Schism, the Spiker would be employed by Jiralhanae serving the Prophet of Truth on Delta Halo [9] and aboard the Anodyne Spirit[19] and in his fleet during the later stages of the Battle for Earth and Battle of Installation 00.[10] Following the base's re-activation, the UNSC tested captured Spikers at Outpost C9 on Earth.[5] The Spiker would be one of many subjects of the report Machines, Materiel and Munitions from the Human-Covenant Conflict, 2525 - Present.[5]

Spikers have seen proliferation in the Post-Covenant War conflicts, with the weapons being widely employed by various Jiralhanae splinter factions including the Keepers of the One Freedom,[20] Children of Oth Sonin[21] and the Banished, the latter of whom seem to have their own variant of the weapon.

By 2610, a Spiker was held in the Museum of Humanity, and would be picked up by Roland Huffman - a veteran of the war.[6]

Changes from Halo 3 and Halo 3: ODST to Halo: Reach[edit]