The Siege of New Alexandria was a major engagement between the United Nations Space Command and the Covenant within the city of New Alexandria on Reach that occurred from August 18 to August 23, 2552. Major evacuations of civilians took place as part of Operation: SWORD 52.[3] The raid ended with the glassing of the city. At least 5,000 civilians and soldiers were successfully evacuated out of the city; however, hundreds more were killed as they tried to escape.[1][2]

Though the supercarrier Long Night of Solace had been destroyed by UNSC forces during Operation: UPPER CUT, the near-immediate arrival of Covenant reinforcements in the Epsilon Eridani system ensured the initiative remained with the Covenant. On August 18, they dispatched a large Jiralhanae-led raiding force to the city of New Alexandria. Heavy fighting raged on the ground and many civilians were killed. Furthermore, the fighting in orbit had scattered the Epsilon Eridani Fleet and allowed the Covenant to support the ground operation in New Alexandria with naval forces.[1] 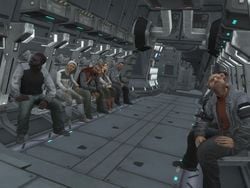 Civilians being evacuated on Pelicans.

"Covies are all over my missile batteries, and I got five thousand civilians across the bay waiting for passage out."
— Sergeant Major Duvall to SPARTAN-B312

By August 23, the situation in New Alexandria had reached crisis point. The battle had raged for five days, as the human defenders fought fiercely against the Covenant advance. However, since the fight in orbit had scattered the UNSC fleet, the Covenant managed to punch through the UNSC's orbital line and support the assault on New Alexandria with four Ceudar-pattern heavy corvettes, which dominated the sky over the city, turning the battle in the Covenant's favor. The UNSC was attempting to evacuate civilians from Traxus Tower to the starport, but Covenant forces had blocked their efforts. On the afternoon of August 23, Noble Six of NOBLE Team entered the city after surviving the destruction of Long Night of Solace. UNSC troopers escorting a group of civilians were engaged by Jiralhanae forces when Noble Six intervened. Led by the Spartan, the troopers managed to overcome the Covenant opposition to secure an elevator leading to the cargo port and Traxus Tower. Before Noble Six could arrive, however, one of the Corvettes demolished the tower. A local executive landing pad provided the only accessible evacuation point, but the structure of the city made it difficult to reach. ODST specialists, the "Bullfrogs", equipped with jet packs, were preparing to secure the executive landing pad when Noble Six arrived at the cargo port. The ODSTs accepted the help of the Spartan immediately, and the group began battling their way across the city. The elite team cut their way through the Covenant forces in possession of the landing pad and cleared the way for Pelicans to pick up evacuating civilians.[1]

A Falcon picked up Noble Six, and took off toward New Alexandria's harbor, with Noble Six providing fire support for engaged UNSC ground forces as they flew. Civilian evacuations were directed to the New Alexandria Starport, where several large civilian transports were conducting a large scale evacuation of 5,000 civilians. The Covenant, however, anticipated the move and deployed ground forces to capture the starport while a corvette took position overhead. With the Stalwart-class light frigate Stalwart Dawn unable to provide air support, one panicked transport pilot lifted off to avoid the Covenant ground troops, and the hovering corvette immediately shot the defenseless ship down. Drastic action was needed. If the UNSC forces could not drive off the corvette, the Covenant ground forces would eventually breach the starport landing bay and slaughter the refugees. If they ordered the transports to attempt escape, the corvette would simply destroy them. The UNSC's only chance of driving off the Covenant warship were two anti-aircraft missile batteries in Caracalla Park, but Covenant troops had captured the area. Noble Six was deployed at the park to lead a counterattack.[1]

Sergeant Major Duvall, in charge of the evacuation efforts at the starport and the commander of troops at Caracalla Park, requested that Noble Six reactivate both missile batteries in Caracalla Park. With the missiles, Duvall hoped to distract the corvette for long enough so that the civilian transports could slip past and escape the city. The batteries were reactivated successfully, and the barrage of missiles badly damaged the corvette just as the Covenant breached the starport's landing bay. With the threat of the corvette above the starport removed, the transports launched immediately, resulting in thousands of civilians escaping the besieged city.[1] A Falcon flying through the nighttime city.

By nightfall on August 23, the situation had deteriorated further for the UNSC forces, as the Covenant had placed communication jammers on numerous buildings throughout the city (including New Alexandria Hospital, SinoViet Center, and Vyrant Telecom Tower), severing communications between the surviving UNSC troops and HIGHCOM. As a part of the counter-operation led and coordinated by Kat-B320, numerous UNSC military units have been dispatched to search for these jammers. Noble Six was tasked with air support as well as destroying the jammers in spite of the now-overwhelming Covenant air superiority. Noble Six eliminated all jammers and aided other UNSC troops trapped in the ruined city. However, two Ket-pattern battlecruisers arrived during this time and began glassing sections of the city. At the same time, the Covenant has discovered the Office of Naval Intelligence's headquarters, the Olympic Tower, as the source of Kat-B320's signal and the command of local UNSC forces. They launched a large aerial attack force on Olympic Tower using Banshees as well as Phantoms, and even deployed numerous anti-aircraft Shade turrets on the surrounding buildings to prevent air evacuations.[2]

With the loss of the city now imminent, Noble Six assisted in the final evacuation of Olympic Tower by destroying the anti-aircraft Shades, allowing the evacuation to proceed and forcing the Covenant attack force to retreat. Noble Six rejoined Noble Team inside the building, where the team had a temporary reprieve while Kat-B320 attempted to link to SATCOM, and Jun-A266 surveyed the city. As discussion moved from Jorge-052's sacrifice during UPPER CUT to the deteriorating situation on Reach, Colonel Urban Holland hailed the team on an open channel. Carter-A259, although risking detection by Covenant, answered the hail and received Holland's orders.[2]

As the two conversed, Jun-A266 observed Covenant vehicles vacating the area around the tower, alarming Emile-A239, who observed that the Covenant rarely retreated for no good reason. Suddenly, a massive radiation flare swept through the area, and resulting atomic excitement scrambled the communications signal between Carter and Holland. The reason for the Covenant ground evacuation and the radiation flare was made clear seconds later: one of the battlecruisers had moved into position over the area and opened fire, beginning to glass the sector. Noble Team fled for the elevators, hoping to escape to a fallout bunker underneath the building, while Carter informed the Spartans that they were being redeployed to SWORD Base for a torch and burn operation. The elevator carrying Jun-A266, Carter-A259, and Emile-A239 arrived first and the three Spartans sprinted across an open area to get to the bunker. The elevator carrying Catherine-B320 and Noble Six arrived seconds later.[2]

As they moved to join the first three, a Sangheili Field Marshal in a Phantom shot Kat through her head with a needle rifle, killing her instantly. Noble Six took the fallen Spartan's pistol and returned fire, soon joined by the other three Spartans, but the Phantom simply flew off, and Noble Six dragged Kat's lifeless body into the fallout shelter as the doors sealed. Three days later, the survivors emerged from the bunker into the ruins of the blasted city, and were extracted by Pelican.[2]

With most civilians and military resources evacuated and the city destroyed, the Covenant moved on. UNSC forces desperately attempted to locate any survivors, successfully extracting the remaining members of NOBLE team from their hideout.[2] NOBLE team then proceeded to SWORD Base for a torch-and-burn operation.[4]