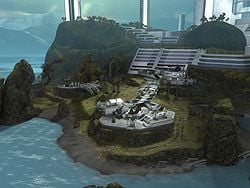 A general view of the park.

Caracalla Park was a public park in downtown New Alexandria, Reach, located across the bay from the city's starport.

During the Fall of Reach, several M95 Lance missile batteries were placed around Caracalla Park to help stave off Covenant air forces. On August 23, 2552, SPARTAN-B312 fired the batteries and damaged a Covenant corvette, allowing civilian transports to escape the city.[1]

Caracalla park was a large urban park in downtown New Alexandria. The park ran from a small lagoon on the right side through some open areas studded with boulders, trees and other buildings to a rocky wooded area to the right. Dividing the lagoon from the wooded area was an access road that ran from the main Pavilion building to a small structure in the center of the park, which also has a bridge that runs from it to another smaller building set on top of a hill. The main Pavilion building has a set of steps leading up from the main road to the hallway inside it and also has some stairs that lead up to the roof, which has a full view of the entire park. On the lower right of the building is an open garage. The park overlooked the Delphi Triple-Strand Network of space elevators.[2]