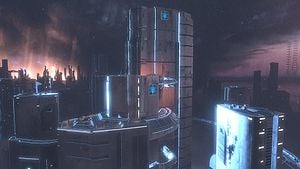 The hospital complex during the Fall of Reach.

The New Alexandria Hospital was a hospital located in downtown New Alexandria, on the human Inner Colony world of Reach. It consisted of two towers: a smaller one with a park terrace, and a taller, larger one. The towers were linked together with several arcing hallways, designated "Skybridges"[1]

During the evacuation of the city on August 23, 2552, several Army troopers located a Covenant communications jammer in one of the Skybridges, but were soon cornered by Covenant troops. The troopers reported its location to Catherine-B320, who sent SPARTAN-B312 to destroy it.[1]