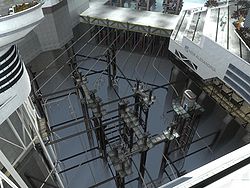 An overhead view of the cargo port.

The cargo port was a seaport in the waterfront of the city of New Alexandria on Reach. Located next to Traxus Tower, the cargo port consisted of a cargo unloading area containing three large cranes and a network of transport tracks used to move cargo containers across the port and into warehouses on the lower levels of the city.[1]

During the Siege of New Alexandria, the cargo port was severely damaged from bombardment by a Covenant corvette over the city. On August 23, 2552, SPARTAN-B312 and a team of ODST Bullfrogs traversed the bombed-out cargo port using Series 8 jetpacks in order to access Traxus Tower and assist in evacuating civilians from the tower's executive landing pad.[1]