This article documents its subject as it pertains to the gameplay of the Halo games, rather than the lore.

The Mongoose, Scout Mongoose[4] or 'Goose[5] is a light human ground vehicle first introduced in Halo 3. It is a small vehicle with no form of armament whatsoever, which can carry one driver and one passenger, and is best used for transporting players around the map or level quickly, rather than as a vehicle for combat.

"[The M274] is pretty nimble for its size; add to that the fact that it can do ninety plus kilo papa hotel over uneven terrain and you’ve got the ultimate commando hot rod."
— Remark of UNSC service member from E2-BAG/1/7.[5]
Main article: Mongoose (fiction)

The Mongoose is an ATV produced by AMG Transport Dynamics since 2483[6] and is a popular Civilian vehicle and United Nations Space Command vehicle.[7] One of the earliest known vehicles known as the Mongoose was the M270, though after decades of use it was replaced with the M274.[8] This M274 Mongoose was among the most prominent to bear the name, and featured a 1000cc hydrogen-injected internal combustion engine (ICE).[5] Circa 2558, the M290 Mongoose began to see much more prominent use.[9][10] The vehicles that have been given this name have been used prominently in a number of skirmishes and battles in the Human-Covenant War and the Post-Covenant War conflicts including the Battle of Metisette, Battle at Szurdok Ridge and Skirmish on Conrad's Point.

The following is a list of all vehicles known by the "Mongoose" moniker in Halo lore that have appeared in the games:

The Mongoose is an archetypal All-terrain vehicle; it's small, fast, and used to traverse all types of terrain. Since its introduction in Halo 3, it has undergone several visual and audio design changes though it has functionally remained nearly the same each time.

In most Halo games, the Mongoose can simply be found either on certain Multiplayer maps or in certain Campaign missions and doesn't need to be unlocked.

The Mongoose is only drivable in the campaign of Halo 3: ODST in the level Mombasa Streets but only if the player acquires Audio logs. These audio logs will begin unlocking one of the supply caches. Several of them contain the Mongoose which can be used throughout the play space. Alternatively, if one is playing the Halo: The Master Chief Collection version of Halo 3: ODST, the Rally Point/Checkpoint "Open City" will have all of these caches open to begin with.[11]

In Halo 5: Guardians, the Mongoose can be found on some Arena multiplayer maps and in certain campaign levels.[9][10]

However, it can be acquired through the Requisition (REQ) system for the gamemode Warzone. To begin receiving the Mongoose regularly in REQ packs, one must unlock the certification. Something that can be acquired randomly from any type of pack.[12][13]

In Halo Infinite, the Mongoose is a reward for gaining 300 Valor and can be delivered at any Forward Operating Base (FOB) under UNSC control. Enough Valor will be obtained in normal gameplay before capturing any FOB, so it will always be available as a reward. Mongooses can also be found at Outpost Tremonius after being captured.

There are a few variants of Mongoose. This includes some general variants and variants from the REQ system in Halo 5: Guardians.

There are 5 REQ variants of the Mongoose in Halo 5: Guardians.

No direct analogous counterparts exist to the Mongoose. However, several vehicles come close to it in size or roughly the role they play in gameplay.

For the Covenant, the Ghost is a close size counterpart to the Mongoose. Although the Ghost is a single-seat vehicle, with mounted weaponry and a boosting function.

The UNSC also has other vehicles that do the same role or are of similar size. The Jackrabbit of Halo Wars 2 performs and is of similar size to the Mongoose. With the weapon upgrade, the Jackrabbit can perform similarly to a Mongoose with a passenger in the first-person shooter games.

The Scout Warthog is the closest to the Mongoose in terms of gameplay. It is weaponless, with only one seat for a passenger. Though it is considerably larger than the Mongoose.

The Troop Transport Warthog while also unarmed provides much more transportation capabilities than the Mongoose as it has three more seats in the rear compartment.

The Mongoose is small and agile and it can be used to get places fast and move one or two people. The Mongoose also has a horn. Depending on the game and gametype, the Mongoose like other vehicles can be hijacked as well. The passenger of the Mongoose can fire most types of weapons from their position, save for detached turrets or dual-wielded weapons. NPC allies can ride in the passenger seat in some instances when it appears. They perform in a similar to player passengers.

In Halo 3, the Mongoose is often driven by AI Marines, with a passenger that has a Rocket launcher. This behavior can be seen on The Storm, The Ark and The Covenant. The Mongoose can be used by the player itself in these levels as well. Where the first Warthog is parked in the level Halo, just to the left of it is a usable Mongoose. Using this does not change the level's final cutscene.[15]

In Halo 3: ODST, the Mongoose can be used in Mombasa Streets after opening the right supply caches. The supply caches are denoted with the Superintendent icon. The cache in Sector 5, where the Rookie's drop pod lands, contains two Mongooses.[11]

The Mongoose is available on the level Infinity in Halo 4.[1] The Mongoose also appears in several missions of Spartan Ops including Episode 5 - Mission 5: Spartan Thorne and Episode 10 - Mission 3: Seize the Power.[17]

In Halo 5: Guardians, it is available in the campaign levels Glassed and Evacuation. NPC teammates can be ordered onto the Mongoose when they appear. An unusable Mongoose appears in the level Meridian Station. The Halo Kart easter egg on Evacuation has players race the level on Mongooses.[9]

In the arcade game Halo: Fireteam Raven, the Mongoose can be seen on Rubble but it cannot be operated by the players at any point.[18]

In Halo Infinite, the Mongoose is a reward for gaining 300 Valor and can be requested for delivery from any UNSC-controlled Forward Operating Base, which Echo 216 will deliver via Pelican drop.[19] The Mongoose can also be found at Outpost Tremonius after it has been captured, as well as at various locations in the overworld. 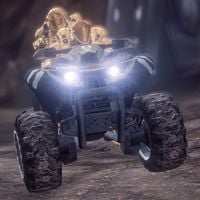 The Mongoose in Halo 3 acts as an objective ferry primarily but can also be used to quickly reach out and control other areas. Initially, Mongoose spawned on Valhalla in both Capture the Flag and Slayer modes as well as on High Ground in 1-Flag CTF.[5] In the map Avalanche, the Mongoose has a unique and unchangeable winter themed skin. Uniquely, the Mongoose spawns on the Elephant in the map Sandtrap. It is also fast enough to outrun the landmines seen on the level.[20]

In Halo: Reach, the Mongoose is featured on a number of maps in the Big Team Battle mode, including Forge variants like Hemorrhage. It is one of the primary vehicles used in the Race gametype. The Mongoose is also usable on the Firefight map Installation 04.[21]

It is prominently featured in Halo 4 and is again mostly a flag capture focused vehicle.[1] The Mongoose however is one of the vehicles that can be spawned on vehicle pads in Dominion. The Mongoose is also affected by the Wheelman tactical package.[22]

The Mongoose returns only in the multiplayer of Halo 2: Anniversary. It functions similarly to previous versions and can be used on Bloodline and Stonetown.[23]

In Halo 5: Guardians, the Mongoose is a part of the Requistion system. A number of Mongoose spawn in front of each homebase on Raid on Apex 7 both in Warzone and Warzone Firefight.[10]

The Mongoose was to appear in Halo Online before its cancellation. It was to be the same design as the Halo: Reach and Halo 4 version and to appear on the map Reactor.[24] It was also to appear on Diamondback and return to the ported Halo 3 maps that originally had them.[25]

The Mongoose is also set to appear in the Halo Infinite multiplayer being usable on the map Fragmentation[26] and Behemoth.[27]

All the available colors for the Mongoose in Halo: Reach forge.

In Halo 3's forge, there is a glitch allowing players to bypass some map boundaries.[28] The two ported Halo Online, Waterfall and Edge, maps can also have Mongooses placed and used on them.[29]

In Halo: Reach's forge, the Mongoose can have its color changed through in-game settings. No other forge allows their Mongoose to change colors. As well, two of the infantry focused maps, Boardwalk and Powerhouse can have Mongoose spawned on them.[30]

In Halo 5: Guardians' forge, a new version of the Mongoose can be spawned called the "Invisible Mongoose". As it's name states, it is invisible but functions similarly to a normal Mongoose.[31] It is designed specifically to be welded with other forge objects.[14]

The following skins are only selectable on the Halo: The Master Chief Collection version of Halo 3.

The Mongoose also shares several other medals with other vehicles, such as the Splatter medal and Wheelman medal. 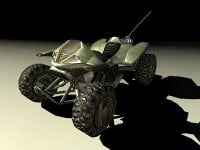 An early Halo 2 prototype of the vehicle.

The Mongoose was originally intended to be put into Halo 2, but was eventually one of many vehicles cut from the game.[32] The Mongoose,internally referred to as the "ATV", was planned to be featured on a few maps such as Headlong.[33] Early plans for the map Colossus called for the ATV on the map,[34] however it was removed once the map was redesigned.[35] Concept art provided on Bungie.net for the map Burial Mounds featured an early Mongoose design, as well suggesting the map itself would feature and be designed for the Mongoose.[36]

During the development of Halo Wars, the Mongoose was prototyped to be included in the game as a unit.[37]

For Halo 2: Anniversary, concept art for the map Stonetown featured the Mongoose, specifically the Halo 3 design,[38] though the final game went with Halo: Reach and Halo 4's design.

Prior to the release of Halo 5: Guardians, the Mongoose was intended to be used in the level Reunion but was removed.[39]