This article is about the location. For the Halo Infinite campaign level, see Outpost Tremonius. 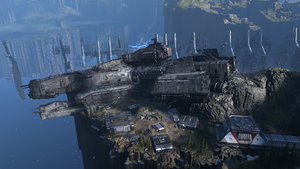 Outpost Tremonius was a Banished Forward Operating Base established on the fragmented section of Zeta Halo during the Battle for Zeta Halo and commanded by its namesake, the Jiralhanae Warlord Tremonius. The outpost was built around the crash site of the UNSC Mortal Reverie which had crash-landed on Zeta Halo during the space battle above the Ring. The outpost has changed hands more than once during the battle on Zeta Halo, and is currently serving as a UNSC FOB.[1]

On December 15, 2559, Spartan Vedrana Makovich came across the Reverie's wreckage and decided to designate the crash site as the rendezvous point for the other UNSC survivors.[2] For the next month and a half, the UNSC used the Reverie crash site as their primary base of operations on Zeta Halo. However, on January 31, 2560, following Spartan Hudson Griffin's failed assassination attempt on War Chief Escharum[3], the Banished, led by then-Chieftain Tremonius and Captain Arthoc, launched a massive assault on the Reverie[4]. On February 2, 2560, the remaining UNSC personnel at the Reverie, faced with overwhelming numbers of Banished troops and armor, abandoned the crash site and scattered themselves across the fragmented section of Zeta Halo.[5]

Following their conquest of the Reverie, the Banished built a forward operating base around the crash site. Escharum rewarded Tremonius for his victory by giving him command of the outpost and naming it after him.[6] In the months that followed, the Banished utilized Outpost Tremonius not only as a military base, but also as an excavation site and storage facility for Forerunner artifacts, including the Harbinger's Cylix.[7] On April 23, 2560, Escharum transferred half of the troops stationed at Outpost Tremonius to Site Novem to support the excavation of the Conservatory.[8] Three days later, Spartan Bonita Stone infiltrated Outpost Tremonius and entered the Forerunner subterrane where she discovered the Harbinger's empty Cylix. With her route back to the surface cut off, she decided to search for the source of a UNSC signal coming from deeper within the facility. However, soon after she transmitted her last report to Spartans Sorel and Makovich, the Spartan Killer Jega 'Rdomnai ambushed and killed her.[7]

On May 28 2560, John-117, who'd been presumed dead since the battle above the Ring, infiltrated the Forerunner foundations underneath Outpost Tremonius in order to retrieve the Weapon. Upon learning of the Master Chief's return, Tremonius descended to the foundations to kill the Spartan. However, the Master Chief killed Tremonius, and then made his way to the surface, where he single-handedly defeated the Banished guarding the outpost. The Weapon then erased the outpost's location from the Banished Battle Net, thereby reclaiming it for the UNSC.[9][1]

After defeating both Escharum and the Harbinger, John-117 and the Weapon returned to Outpost Tremonius.[10]