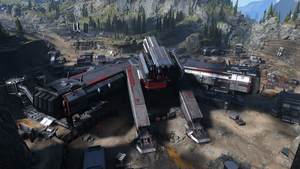 Site Novem was a Banished dig site established on the fragmented section of Installation 07 that was established during their occupation of the ring.[1][2] The site's main purpose was to pierce the installation's superstructure using a flame-bore and give the Banished access to the Conservatory. The Jiralhanae Chieftain Bassus oversaw security of the operation until his death at the hands of Master Chief John-117 on May 28, 2560.[3] 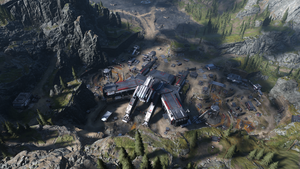 Site Novem seen from above.

Site Novem was established inside a large crater at the base of a mountain ridge on the opposite side of the Conservatory's "true" entrance.[4] First Lieutenant Floyd believed the dig site was large enough to be seen from orbit.[5]

The site's main feature was a giant mining laser, called a flame-bore by the Banished,[1] which had been modified by the Harbinger. The laser was mounted atop a large central structure, surrounded by armories, troop barracks, guard towers and other smaller support buildings. Inside the central structure, Banished personnel operated and monitored the laser from behind an energy barrier. The structure was accessible via a pair of gravity lifts, one on either side. The back of the structure could also lower itself to form a ramp.[3]

The flame-bore required two external power regulators to prevent overheating. Each power regulator was itself regulated by a pair of cooling pylons. These pylons were normally concealed underground to protect them from attack, but could be raised using nearby manual controls.[3]

Although the Banished primarily used the flame-bore to pierce the Halo's surface at Site Novem, they utilized other excavation machines as well. The Banished also harvested natural resources from the area around Site Novem to fuel the site's operations. By the time the Master Chief arrived at Site Novem, the Banished had turned the surrounding area into a desolate wasteland, much to the distress of the Weapon.[3]

Following the apparent demise of Atriox when Cortana sacrificed herself to destroy the Silent Auditorium and disable the Ring, his second-in-command and old mentor, War Chief Escharum, assumed his place as leader of the Banished and set out to fulfill Atriox's goal of seizing control of the Ring. To this end, Escharum ordered his troops to set up multiple excavation sites around the Ring in order to uncover Zeta Halo's secrets.[6] Acting on intelligence provided by Chak 'Lok,[7] the Banished established Site Novem at some point prior to January 30, 2560[8][Note 1] for the purpose of circumventing the Conservatory's main entrance and breaching the facility from underground.[Note 2]

After the Banished drove the UNSC survivors from the crash site of the Reverie and established their own base at the site, Chieftain Tremonius's forces excavated the area underneath the outpost and recovered the Harbinger's Cylix. Inspired by what Atriox had learned on the Ark, Escharum set out to free the Harbinger. On April 18, 2560,[10] Escharum forced a human POW, Lucas Browning, to unlock the Harbinger's Cylix, releasing her.[11][12] Once freed, the Harbinger agreed to help the Banished take control of the Ring in exchange for their help in locating and freeing the rest of her species, the Xalanyn, who had been imprisoned by the remaining Forerunners after the Forerunner-Flood war due to the Xalanyn having inexplicably survived the Halo array's firing.[13][14] In order to achieve both objectives, the Silent Auditorium had to be repaired first - a process known as the Reformation. The Forerunner routines needed to initiate the Reformation were stored in the encephalon of Despondent Pyre, the Monitor of Zeta Halo, who resided in the Conservatory. Escharum soon began focusing his attention entirely on the operation at Site Novem.[15]

Chieftain Bassus oversaw security at Site Novem as the personnel there worked to gain access to the Conservatory. Meanwhile, the maintenance depots Ransom Keep[16] and the Forge of Teash[17] supplied the site with the necessary excavation equipment. The Banished at Ransom Keep even stripped captured UNSC vehicles and other hardware for spare parts to maintain the equipment. On April 23, 2560, Escharum ordered over half of the troops at Outpost Tremonius to reinforce Site Novem.[18] At one point, Commander Durakkus at the Forge of Teash made a report on Site Novem concerning the hollows beneath the excavation site, and sent his findings to Escharum. The War Chief considered his findings promising, sharing them with the Harbinger herself. She agreed, but was skeptical of the Banished's methods in accessing the Conservatory. As such, the Harbinger wished to inspect the site.[1] During her visit, she modified the flame-bore, enabling it to pierce the Ring's Forerunner alloy.[3]

The Banished devoted extraordinary amounts of resources and excavation equipment to Site Novem, a fact that did not go unnoticed by the UNSC resistance on the Ring. While monitoring Banished activity at Outpost Tremonius, Spartan Bonita Stone learned of Escharum's interest in the Conservatory. She reported her findings to Spartans Theodore Sorel and Vedrana Makovich[5] who arrived at Site Novem the following day on April 24, 2560.[15] By May 15, 2560, the Banished had used their modified mining laser to successfully breach the Conservatory.[19] Having deduced the Banished's plan, Sorel and Makovich followed the Banished into the Conservatory in order to stop them from capturing the Monitor. However, the Spartans were ambushed by Sangheili Blademaster Jega 'Rdomnai who killed Makovich and wounded Sorel.[20] A short time later, Jiralhanae Spartan Killers Hyperius and Tovarus finished off Sorel.[21]

Spartan Hudson Griffin also learned about Site Novem and the Conservatory. Following his failed attempt to assassinate Escharum, Griffin tried to stop the Banished's operation at Site Novem on his own. However, he was captured near the dig site and sent to the Tower, where he would spend the next four months being tortured by the Sangheili Warlord Chak 'Lok.[8] On May 28, 2560, Master Chief John-117 stormed the Tower and killed Chak 'Lok, though by then, Griffin was nearly dead. Griffin managed to tell the Chief about the dig site and the Conservatory before succumbing to his wounds.[9]

John-117 notices the flame-bore about to fire on his position.

Acting on the information provided by the late Spartan Griffin, John-117 traveled to Site Novem, intent on discovering what the Banished wanted with the Conservatory. Before he could enter the Conservatory, the Banished reactivated the flame-bore and blocked the entrance tunnel. The Chief, however, destroyed the mining laser's power regulators and then entered the central structure that controlled the laser. Inside, he fought and defeated Bassus, after which his Smart AI companion, a copy of Cortana known as The Weapon, hacked the controls and caused the laser to overload. With the flame-bore destroyed, the Chief entered the Conservatory.[3] Despite the Chief's arrival, however, the Harbinger managed to capture Despondent Pyre. She subsequently extracted the Monitor's encephalon, which she would later use to start the Reformation.[4]