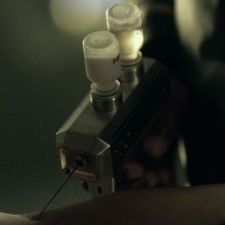 "Turns out the cryo blisters and your difficulty breathing are an allergic reaction to the cytoprethaline. It's a drug we inject to keep ice crystals from forming in your cells during cryosleep. Occurs in about 1 in every 50,000 or so."
— Doctor Hughes[1]

Cytoprethaline is a cellular anti-crystalline drug designed for humans in cryo-sleep. Within the Unified Earth Government, cytoprethaline is an Rx-only drug; legal only through a medical prescription.[2]

Cytoprethaline prevents damage to cell membranes from ice crystal formation. It is usually injected, recommended by a doctor, but usually by a medic or a pre-measured self-injector.[3] The injection of cytoprethaline is routed into the subcutaneous tissue.[2] Cytoprethaline was developed around the same time that cryonics became commonplace due to interstellar travel, to account for the dangers of low temperatures in cryo-sleep. Cryo-sleep is almost always fatal without the use of cytoprethaline.[3] The only exceptions is SPARTAN-IIs where they can head straight to cryo-sleep without Cytoprethaline due to their augmentations.

However, 1 in 50,000 people exhibit an allergic reaction to this drug; those that do are disqualified from UNSC service or discharged if discovered after entering training, but can still serve in civilian roles attached to the UNSC.[3] Thomas Lasky is one of the few people to be diagnosed with this allergy, which was to be grounds for his discharge from Corbulo Academy of Military Science; however, the school was attacked by the Covenant before Lasky was shipped out.[1]