For other uses, see Camouflage (disambiguation). 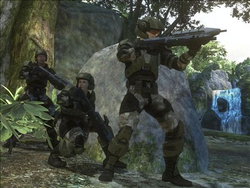 The UNSC Marine Corps standard-issue battledress comes with camouflage to blend into the surrounding environment.

Camouflage, also known as cryptic coloration or concealing coloration, is a form of deception that allows a person or object to remain indiscernible from, or "blend into ", the surrounding environment. Examples include the battledress of UNSC Marines, ODSTs, UNSC Army and some coatings on weapons.

Camouflage dates back to World War II, where camouflage was beginning to be used by both factions of the war. They have changed throughout the years and are still used in combat by UNSC Marines. One of the best forms of camouflage from World War II and beyond is the ghillie suit, made of an artificial worn layer, with an overlay of materials common to the operational area.

The UNSC utilizes many forms of camouflage, each used for a specific environment. The most basic camouflage patterns are the following:

The UNSC Army also uses a variety of different camouflage patterns in their BDUs, including a default woodland camouflage and a sand-colored desert camo pattern.[4] Some special force units use darker-tinted woodland pattern.[5] They also use face painting camouflage.[6]

Covenant forces use armor coloration to differentiate rank, with no effort to employ passive camouflage methods. As a result, Covenant armor is useless in that aspect. Instead, Special Operations Sangheili and Unggoy use active camouflage systems for stealth operations, which is far superior to passive camouflage.