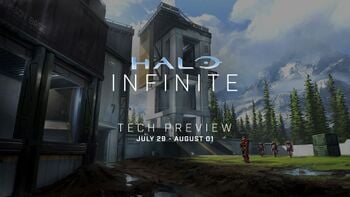 A promotional image for the Tech Preview

The focus of this technical preview was Infinite's 4v4 (players versus bots) multiplayer matches, Academy's Weapon Drills, and UI tests on Infinite's Battle Pass, Challenges, menu, and Spartan customization. Concurrent with this tech preview, a new version of Halo Waypoint was tested on PC, Android, and iOS.[1] Customization options available were a small selection of those available in Season 00: For Our Tomorrow's battle pass. Player versus player modes were also briefly, informally tested on the night of the flight's conclusion.

During the Halo Infinite Tech Preview, the player could unlock armor permutations for their Spartan. The tech preview granted players a set amount of in-game credits (cR). Players were free to use their cR how they see fit, but customization items unlocked during technical previews will not carry over when Halo Infinite is released.[1]

Players who were part of the first Tech preview and those who sign into the Halo Insider Program before September 13, 2021 had access to the Tech Preview, which was made available between September 23–26, and September 30-October 3. A live stream of the Tech Preview was shown on September 22, 2021.

The focus of this technical preview was Infinite's new 12v12 Big Team Battle mode and The Academy's Training Mode, alongside Bot Slayer and Social Arena matches on objective game modes, Weapon Drills, and updates on UI tests on Infinite's Battle Pass, Challenges, menu, and Spartan customization. Concurrent with this tech preview, the new version of Halo Waypoint was tested on PC, Android, and iOS.

Unlike the first Tech Preview, the second preview featured PvP matches during both weekends. However, the BTB mode was only available in the Tech Preview's second weekend.