From Halopedia, the Halo wiki
(Redirected from REQ card)
Jump to: navigation, search 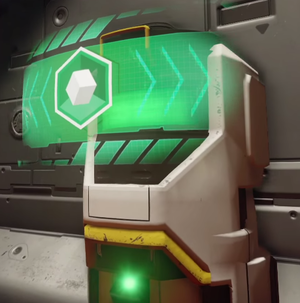 A REQ terminal on Escape from ARC.

The Requisition system (REQ system) is a feature that allows players to unlock certain rewards which can alter cosmetics and gameplay within Halo 5: Guardians multiplayer.

Players earn REQ Points after each match of Arena or Warzone multiplayer. These points can then be used to purchase REQ Packs, which contain various requisitions: unlockable weapons, vehicles, armors, skins, assassination animations, stances, and other items. REQ Packs are also earned by advancing to a higher Spartan Rank and completing Commendations, and once per day for winning in Arena and Warzone. Although REQ Packs are earned in both Arena and Warzone multiplayer, only cosmetic items are usable in Arena to maintain balanced competitive play. Gameplay-affecting requisitions (such as weapons and vehicles) are, however, usable in Warzone.

The requisitions available to the player are governed and balanced by Warzone's REQ Level and Energy systems, which are in turn dependent on player and team performance. When players first launch Halo 5: Guardians, they’ll receive a starting REQ bundle that includes 54 REQ cards, as well as 7,500 REQ points.[1]

New REQ content will continue to be released following the game's launch. REQ packs can also be purchased with real-world currency.[2] The different tiers of packs include Bronze, Silver, Gold, and Premium with the level determining the quality of REQs inside. A Gold REQ Pack has a chance of including Legendary requisitions, while a Bronze REQ Pack does not.[3]

The REQ cards can be identified through three different categories, the first being the type of usage for the cards, the second being the rarity of a card and lastly the actual types of cards received by the player.

There are two types of cards: Permanent REQ cards are cards that can be used an unlimited amount of times (such items include Loadout Weapons, Helmets, Armor, Emblems, visors, Player stances, assassinations, armor mods, certifications, and weapon skins) while Single use REQ cards are cards that can only be used once (such as Power Weapons, vehicles, powerups, and boosts).

There are six levels of rarity for each card: Common, Uncommon, Rare, Ultra-rare, Legendary, and the sub-class Mythic rarity.

One kind of REQ cards are the REQ point cards. These cards give players REQ points to use to buy more REQ packs.

There are seven types of items a player can get out of REQ packs exclusive to Warzone.

There are eight types of REQ cards that can be used in both Warzone and Arena. These are mostly items that have zero effect in multiplayer.

REQ packs are bundled REQs, the content of which is mostly random. These packs can be acquired by players in-game, for example when players level up their Spartan Rank (SR) and complete Commendations across multiplayer, or by purchasing real-world Halo merchandise such as purchasing Halo: Last Light.

The following is an inexhaustive list of ways to acquire REQ packs:

There are numerous different types of REQ Packs in Halo 5: Guardians. The contents of a REQ pack are mostly random, and are determined the moment it is opened.[9]

These are the items in the Promotional REQ packs. As they have pre-determined items in them. All of these items can be unlocked normally in REQ Packs(bar the Console Edition Emblem)

Depending on the choice of REQ packs opened, a player may end up unlocking certifications and cosmetics at either a fast rate or an overly slow one. For instance, opening only Gold packs would demand a high amount of REQ points each time but would take ages to unlock everything from Uncommon to Legendary, while inversely opening only Bronzes would let the player acquire a new pack with the points from only a single match but yield only Common unlocks.

If the player starts with only opening Bronze packs until they have every Common unlock, then only Silver packs to unlock everything Uncommon to Rare, then only Gold for Ultra Rare to Legendary, it would cost them (as of the Warzone Firefight update) 3,269,500 REQ points, made up of 224 Bronze packs, 216 Silver Packs, and 192 Gold Packs.[note 1] Doing so in cash would cost $841.76 USD.[10]

There is one item that cannot be unlocked through the REQ system as it is exclusive to staff of 343 Industries. The lone item is as follows: