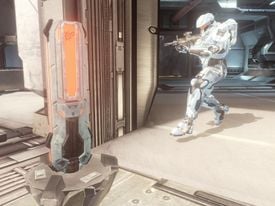 A Spartan-IV approaching a Damage Boost on Complex.

The Damage Boost is a power-up enhancement featured in Halo 4[1] and Halo 5: Guardians.[2] It lasts for 30 seconds and increases the damage per shot of the player's weapons by 100%. This includes vehicle-mounted weapons.[3] While in use, the player is awarded a visual effect which gives off a red full-body glowing effect and leaves a trail as the player moves.[1] This effect also appears on the player's HUD.

In Halo 4 Damage Boost is typically earned in Infinity Slayer games through ordnance drops. It is also earned and automatically equipped in Regicide for surviving as king for 60 seconds. In Halo 5: Guardians damage boosts are commonly used in Warzone.

Changes from Halo 4 to Halo 5: Guardians[edit]