This article is about the Banished outpost on Installation 07. For the Halo Infinite mission, see Riven Gate. 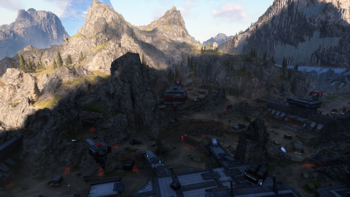 Riven Gate, seen from above.

Riven Gate was a Banished-operated checkpoint established on the Zeta Halo fragment during the Battle for Zeta Halo. The Banished constructed this massive gate structure in order to control the primary transportation routes across the southern section of the Ring fragment. The Jiralhanae Commander Iltho (also known as Iltho the Chosen)[1] led the Banished troops guarding the Gate.[2]

Constructed near a trench in the middle of the Ring fragment's southern section, Riven Gate consisted of two massive, heavily-fortified outer gates and a normal-sized inner gate. Banished troops operated each gate from separate gatehouses. While the gatehouses for the outer gates were located within their respective gates themselves, the gatehouse for the inner gate was its own building, the door of which was controlled from a nearby guard tower. This building also served as a small hangar for a Kaelum Workshop Banshee. The outpost's primary power generator was located in a cliffside power station.[3]

The Banished constructed Riven Gate prior to January 31, 2560.[4] The Gate effectively split any UNSC forces on the southern end of the fragment in half and trapped them in Banished territory.[3]

On January 31, 2560, following Spartan Hudson Griffin's failed attempt to assassinate War Chief Escharum, the Banished gathered a massive force led by Chieftain Tremonius at Riven Gate in preparation for a counter assault on the crash site of the UNSC Mortal Reverie. Spartan Bonita Stone reported this to the UNSC personnel stationed at the Reverie and warned them that the Banished would arrive at the Reverie by nightfall.[4]

On May 28, 2560, Master Chief John-117, who had been presumed lost during the space battle above Zeta Halo, arrived on the Ring. Upon learning of the Spartan's return, Commander Iltho anticipated that the Chief would attack Riven Gate itself, a prediction that soon came true.[2] Despite the Gate's defenders being prepared for his arrival, the Chief breached the gatehouses and lowered all three gates. The Chief's AI companion, The Weapon, then directed him to the outpost's power generator located in the cliffside. The Chief subsequently stormed the power station and destroyed the generator, ensuring the gates remained lowered. The fall of Riven Gate enabled the UNSC to freely move across the southern section of the Ring fragment for the first time in months.[3]