From Halopedia, the Halo wiki
(Redirected from Fusion Coils)
Jump to: navigation, search

This article is about the explosive container. For fusion cores in general, see Fusion reactor. 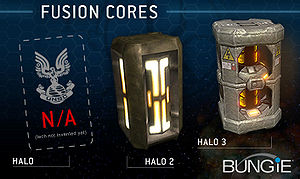 Shown above is the evolution of the fusion core. Note that this item was not present in Halo: Combat Evolved.

A fusion core, also known as the fusion coil, is a UNSC ground container for superheated plasma. As such, their contents are highly radioactive and volatile. The container is made primarily out of glass and aluminum, and has been jokingly described as the "safest, most intelligent way to transport and store highly explosive compressed plasma energy".[1]

The fusion core is similar to the Covenant plasma battery, but can be detonated with fewer shots.

The Halo 2-era fusion cores are explosive objects matte brown in color and rectangular in shape, overlaid with what appears to be austere gold circuitry on the surface. In Halo 3, the fusion coil has been graphically redesigned. The actual plasma core appears to be an amber, darkly-glowing, cylindrical object within a metallic-gray colored frame. When slightly damaged, the internal core glows a warning red; when heavily damaged, it glows bright white. Stickers on the frame warn of radioactivity and high voltage. It emits a loud humming noise constantly.

The appearance of the fusion core in Halo: Reach changed very little from the design in Halo 3. The once yellow glow of the fusion core is now a dark green. This appearance remains unchanged in Halo 4, with the exception that the internal glow is now blue instead of green. Additionally, Halo 4 contains another form of fusion coil that seems to be filled with a liquid substance that will make a splash when destroyed, and will disintegrate nearby targets. This fusion core exists in the Majestic, Castle, and Bullseye map packs and in Forge Island.

A radioactivity warning on the top of a Fusion Coil.

Several shots from any weapon can detonate these volatile cores. The explosion is a bloom of yellow and red superheated gas and sparks.

In multiplayer, players often may attempt to lay an ambush for a hostile near a core by tossing a fragmentation grenade towards the core when the enemy forays near. Alternatively, they can be pushed from above onto passing enemies, exploding on impact with the ground, or used as anti-vehicle landmines at vehicle choke points. They have also been used for Explosive Jumping and in Forge to create perpetual explosions.

Fusion cores can be effective explosive objects on campaign and multiplayer as they are capable of weakening the opponent's health and/or shields. A trap can be made by shooting one with a shotgun at a certain distance, causing it it fall over and glow white before having a very delayed detonation; which also be triggered by touching the glowing container.