The most common method of explosive jumping involves grenades or the rocket launcher. All a player has to do is look down and cause the explosion, jumping as it occurs. In the case of a grenade (grenade jumping), the player must simply throw a grenade down in front of them, and jump over it right as it explodes. If using the Rocket Launcher, the player should fire a rocket while they are already in the air and crouch jump (to avoid being killed by the resulting blast).

In Halo 3, a Brute Shot can also be used; simply fire two shells while in midair.

In Halo 3, Plasma Grenades are easier to use, but Frag Grenades allow for a higher jump. The Spike Grenade is not recommended, as its explosion goes upward and it will likely kill the player. In Halo 2 and Halo 3, an Overshield can allow for simultaneous use of both grenades and rockets, giving a more explosive result (and a potentially higher jump).

In Campaign, skulls can be used to further boost the height of an explosive jump. In Halo 2, the height of the already-boosted jump can be increased with the Sputnik Skull; in Halo 3, the Cowbell Skull can do the same by increasing the power of the blast. Care should be taken when using the Cowbell Skull, as if the jump is not timed right, the increased splash damage can kill players.

This is a trick that works best in the Halo 2 multiplayer level Zanzibar. The only requirements are a Rocket Launcher and a Brute Shot, though an Overshield is also recommended. 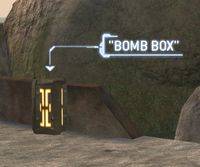 First, push one or two of the Fusion Coils over to the "target" and jump on top of one of them. Note that without an Overshield, three Fusion Coils will kill you. Then, jump and about half a second after you tap the jump button, shoot the fusion coils. The resulting explosion will propel you into the air.

This is a trick in Halo, and is often used for getting into high ledges.

To do this trick, a player would need a Rocket Launcher, a Plasma Grenade, a Frag Grenade, and a Warthog. The player would literally jump onto the end of the Warthog's turret (as in not manning the turret) and use the weapons in a specific order: first, the Plasma Grenade; then the Frag Grenade; and finally, the Rocket Launcher. Proper execution of the trick can result in a very high "jump".

Note: This trick will result in your death, but is interesting to watch.

Stare directly down at your legs. Make sure you stick yourself with a Plasma Grenade. Immediately afterward, fire the Rocket Launcher at your feet while in the same position you started in. The rocket blast should propel your body, and the following explosion from the Plasma Grenade should boost it even further, possibly even hitting the level's invisible ceiling. This trick should be done on a large open map, like Blood Gulch, for satisfying results.