This article is about the model introduced in Halo: Combat Evolved. For other Spirit variants, see Spirit.

"Uh-oh, another bandit droppin' in behind us! They're tryin' to flank us!"
— Manuel Mendoza spotting a T-25 Spirit during the Battle of Installation 04.[8]

The Dextro Xur-pattern Warrior Transport[9] or more formally the DX-class dropship,[4] (UNSC Type classification: Type-25 Troop Carrier, T-25 TC),[2][5] or more commonly the Spirit,[5] is an infantry and logistical dropship and utility craft manufactured by their Tertiary Assembly Forges.[2] Dubbed the Dextro Xur design pattern,[1] the Type-25 Spirit served as one of the primary transport crafts of the Covenant military, though the Nuro'k Xur-pattern Spirit is now utilized by the Swords of Sanghelios' army and other Covenant remnant factions.[3]

The Spirit is a moderately large craft, being 33 meters (108 ft) in length.[2] The dropship is an angular, tuning fork-shaped spacecraft with two parallel personnel bays along the exterior of each "prong". The pilot's compartment is located at the rear, between the twin troop bays. Each of these personnel bays has two doors that open and close vertically; however, they do not close fully and leave a small opening along the length of the bay. Between these extended personnel bays, a gravity hoist[1] fluctuates visibly as it generates the ship's anti-gravity propulsion, similar in appearance to the energy pulse of the gravity lifts the Covenant use to commute between the ground and hovering ships. This same system is used to ferry payloads to their destinations.[3] A uniquely stable contragravity system is fitted onto the dropship, which can adapt to a wide range of load profiles without any apparent compensation delays or loss of efficacy.[1] The hull of the Spirit is unexpectedly robust and the pilots are well protected in the dropship's aft cockpit. A Spirit is more likely to survive combat zones that would be considered suicidal for the somewhat more fragile Phantom.[3]

Like all Covenant dropships, the Spirit utilizes field shaping vanes to modify its aerodynamic profile, but this has little defensive application. Energy shields could be fitted, but there were few reasons to do so before the Human-Covenant War.[1]

The Spirit's awkward split-fuselage design and claustrophobic troop bays have proven to be a significant disadvantage for the dropship. The features may make troop and vehicle deployment a difficult and frustrating affair for the pilot, as well as a distressing experience for the Spirit's passengers. These disadvantages proved even more troublesome for its occupants after the United Nations Space Command learned to exploit the Spirit's predictable deployment methodology.[3]

The Spirit is crewed by two Obedientaries, a pilot and a sensor operator, who both occupy the armored command pod at the rear of the ship. Because its sensors and flight control system are intuitive and well-integrated, the pilot has excellent situational awareness of aerospace threats and environmental hazards. Because Sangheili disliked piloting dropships, Spirits were more often controlled by Unggoy and Kig-Yar crewmen.[1]

As dedicated transports for infantry and vehicles, the Spirit is capable of carrying up to thirty passengers—with fifteen being held in each troop bay. Apart from stasis harnesses that buffer the stress of evasive maneuvers and turbulence, there are no safety systems installed in the bays to protect passengers stationed within.[1] Up to two light-armored vehicles such as two Karo'etba-pattern Ghosts, one heavy-armored vehicle such as a Zurdo-pattern Wraith, or other possible payloads such as supply canisters for ground troops can also be carried. As aforementioned, these payloads are ferried underneath the dropship via its gravity hoist.

Capable of powered flight and hovering, the dropship appears quite cumbersome and awkward to pilot based on battlefield observations. Despite this, the Spirit has been known to reach speeds of 350 kilometres per hour (220 mph) while cruising and has a maximum speed of 1,099 kilometres per hour (683 mph).[3][6]

While these dropships have life support for use in the vacuum of space, they do not have a slipspace drive. During Operation: FIRST STRIKE, a Spirit was modified with reinforced metal so it could be launched out of a ship already in slipspace. Even with this modification, the Spirit became severely damaged after the exit and was still unable to travel into the slipstream on its own accord.[10]

Spirits are armed with a singular rotating, low-mounted heavy plasma cannon, located directly below the cockpit of the dropship.[6] Though the weapon serves a defensive role,[3] the cannon is capable of delivering substantial damage to ground troops and vehicles.[3] An ancient design, its fire-control system is programmed with command codes that are barely understood by modern users.[1] Unlike the humans' conventional bullet projectiles, the superheated plasma fired from the cannon travels slower, and are ineffective against fast-moving objects. Thus, it is only used as fire support during deployment of troops.[3] A simpler, manually-controlled version of this weapon is used in some Shade turret patterns.[1]

While many ex-Covenant factions started phasing out the Type-25 Spirit in favor of the Type-57 Spirit, the Banished continued to use modified Type-25 Spirits. These Banished Spirits had their contragravity system reengineered so the chassis could handle the strain of transporting prefabricated buildings for Banished outposts.[15] The Banished utilized many T-25 Spirits against the crew of the UNSC Spirit of Fire during the Second Ark Conflict.[16] 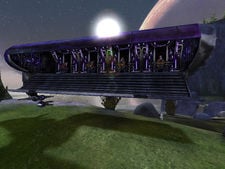 A Spirit about to disgorge Grunts in Halo: Combat Evolved.

As well as being able to drop off a large number of Covenant troops on the battlefield, the Spirit is also capable of providing heavy support in combat thanks to the turret that lies underneath its cockpit. When dropping off troops, the Spirit will be stationary in mid-air for a few seconds, before descending and opening its troop bay doors. In rarer cases, the Spirit may stay suspended in midair; the troops that disembark may actually die from the fall.[17] Spirits can also deploy Ghosts and Wraiths into the battlefield. Like Pelicans, Spirits follow a set path: they appear from around the background, arrive at the battlefield, deploy troops, take off and disappear around the corner.

The Spirit, including its turret, is indestructible. In addition, its heavy, bulky armor can protect those resting within the troop bay doors.

The best tactic, if on lower difficulty levels, is to attack the vulnerable infantry (shoot or toss a grenade) as they disembark from the Spirit. On higher difficulties, this would be unwise; hiding behind cover until the ship leaves is often the best course of action in this situation. Without cover or good tactics, a careless player might die quickly.

The Spirit in Halo: Reach behaves similarly to its Halo: Combat Evolved incarnation. One significant change, however, is that of its firing operation, which now matches the behavior of the Phantom's plasma auto-cannon. Instead of simultaneously firing three bolts of plasma, it now sports a weapon similar to the Elo'Nakada-pattern concussion rifle, which is significantly more powerful but fires only one bolt at a time and at half the speed. It remains indestructible, but its turret can be shot off with enough firepower. In Firefight mode, destroying the turret grants the player who did so a two credit bonus and a kill with whatever weapon they are using (counting towards the specific commendation for that weapon and towards any weapon related sprees).

Accoring to Shi Kai Wang, the Spirit born out of the necessity of a open space game that needed to introduce units from a dropship, instead of appearing out of nowhere behind blockades.[18] Originally, the Spirit was designed with the "tuning forks" as the vehicle's back, but a miscommunication with the animation and 3D teams made it the other way around, with the forks tuning forward; ultimately it was decided to keep the vehicle that way.[19] Unlike other Covenant vehicles, the Spirit was not based on an animal, but on what Doug Chiang did with the Star Wars vehicles: bringing clean organic shapes with hard edges.[20]

Designing a ship that could transport troops and vehicles was challenging physically for Wang, and the use of the tractor beams between the forks was used both to simplify that challenge and as an answer to the Covenant's unexplanable technology.[21] The players's ability to pick off enemies when the Spirit's troop bays opened was an accident born from how the physics worked on Halo: Combat Evolved's engine.[22] At the end, the Spirit made its role, but Shi Kai Wang felt the vehicle was a little out of character in the Covenant's design language, being this the reason Wang redesigned the Spirit into the Phantom in Halo 2. [23]