This article is about the campaign level. For other uses, see Keyes (disambiguation).

Keyes is the ninth campaign level in Halo: Combat Evolved. In this level, the MCPO John-117 returns to the Truth and Reconciliation to rescue the titular Captain Jacob Keyes. The Master Chief fights his way through the ship and on the ground while trying to survive the bloody engagement between the Flood and surviving Covenant forces. At the end of the level, the Master Chief discovers a horrifying truth: Captain Keyes has been completely taken over by the Flood. With no other choice, the Chief physically removes the Captain's implants which contain the access codes to the UNSC Pillar of Autumn. He then hijacks a Banshee and escapes.

John-117 suffers a hard landing upon arriving inside the cruiser.

View flies through a canyon filled with pools of reactor coolant under the Truth and Reconciliation. The Ket-pattern battlecruiser is resting on the top of the canyon, heavily damaged. The Flood and Covenant forces are fighting all throughout the region.

John-117 teleports into the end of a corridor in the cruiser. The view flips over, upside down, and the Master Chief falls on his head; he was teleported in upside down.

The Master Chief whacks the side of his head with his fist as he stands up.

The Chief begins to walk down the hallway.

If the player stalls around on the corridors outside the starship's bridge:

The Chief encounters a small group of Unggoy fighting the Flood; they are soon overwhelmed. The Chief eliminates the Flood, continues down the hallway, and gets to one of the hangar bays. A large hole in the floor is just past the door, blocking the Chief's progress. Several Sangheili are present in the area beyond, fighting more Flood.

After staying in that corridor for a few moments, Flood begin dropping out of a hole in the ceiling behind the Chief, cutting him off.

The Chief fights off the increasing horde of Flood for a few more moments.

If the Chief lingers for too long, fighting the Flood:

If the Chief still continues to hold his ground:

Overwhelming Flood forces continue to pour down the hallway, forcing the Chief into the hole.

John-117 leaps down into a pool of coolant.

The Master Chief falls into a large pool of coolant, which breaks his fall. View begins under-coolant. Covenant and Flood are heavily engaged around the pool.

A navigation point appears on the Chief's heads-up display. He continues to head toward the gravity lift. Eventually reaching an overhang, the Chief is able to see a pair of Mgalekgolo engaged with masses of Flood carrier forms.

The Chief fights his way through more Covenant and Flood forces until he finally reaches the gravity lift. Several Sangheili and Unggoy furiously defend the gravity lift from increasing numbers of Flood, desperately trying to prevent the parasitic creatures from entering the Truth and Reconciliation.

Once the area is cleared, the Chief takes the gravity lift back inside the ship:

The Chief re-enters the stricken cruiser.

The Chief, standing in the gravity lift, looks up and flies up into the Truth and Reconciliation.

The Chief arrives at the gravity lift bay, which is strewn with dead Covenant troops. Blood is splattered all around. A few Infection Forms wander around.

The Chief finds an unlocked door and walks through it.

Cortana marks the spot with a navigation point.

Fighting his way through multiple Flood carrier forms, the Spartan eventually reaches the nav point, it turns out to be a cargo bay. Flood forms walk around the area, guarding the corpses of dead Covenant troops in the corners.

After fighting through hordes of Flood, the Chief finds more living Covenant. He continues on, reaching the shuttle bay.

A group of Sangheili hold the center of the shuttle bay, using a Shade turret to provide supporting fire while a single Mgalekgolo and other Covenant troops fight the Flood in the corridors. The Chief ascends through the corridors and reaches the third floor.

She assigns another navigation point. A Spirit dropship enters the open shuttle bay doors and disperses a group of black-armored Covenant soldiers in the lowest area of the bay. The Chief battles through more Flood guarding the open door that the navigation point directs him to. Killing all hostiles, the Chief follows the navigation point, venturing deeper into the chaotic hallways.

Keyes screams over the COM channel in agony.

The Chief eliminates both Covenant troops and Flood forms outside the bridge. He then enters the bridge and walks up the ramp leading to the command center. 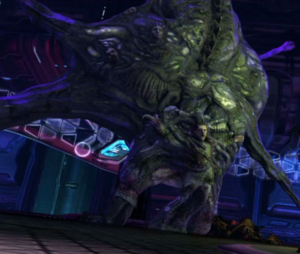 The Chief aims his weapon at the Proto-Gravemind sitting on the command center in the bridge as he walks up to the raised platform. The Captain's face sticks out of it, with his body dangling below, deformed.

The Chief stares at what's left of Keyes.

Master Chief punches into Keyes' skull, sticking his hand inside. He pulls out the neural implants, shakes the Flood biomass off of them, and inserts them into his helmet.

Side doors open and hordes of Flood forms charge into the bridge. At the same time, the doors the Chief entered through open up to reveal a Covenant Special Operations team. A huge firefight ensues.

Once the Chief returns to the shuttle bay, another Covenant Spirit dropship enters the hangar, dropping off more troops, escorted by two Banshees. The Banshees land, and their Sangheili pilots jump out.

John-117 escapes the Truth and Reconciliation despite heavy fire.

The Chief, after fighting through Covenant Special Operations troops and Flood forms, eventually reaches the lowest level of the shuttle bay and steals one of the Banshees. (Alternatively, the Chief can just jump off of the upper level and skip most of the fighting.) 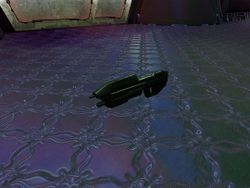