Chiron TL-34 is a multiplayer map in Halo: Combat Evolved. The map layout is one of the unique maps in the Halo series and is asymmetrical by design. It is set in Chiron, a space station orbiting Mars.

The multiplayer map consists of nine chambers, each of which connected by a network of teleporters. Due to its asymmetrical design, the chambers are distinct from one another and requires players to be familiar with one chamber from another. Each chamber is small and narrow, but it also offers players covers and hiding spots for them to counter-attack other players. Each teleporter sits at the end of a red hallway, while each red hallway connects to a larger room, some of which being split into hallways by walls in the center of the room. 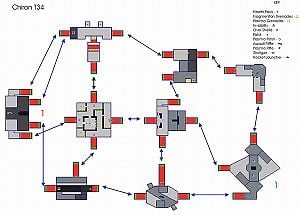 A map of every room in Chiron TL-34