This article is about the Halo: Combat Evolved campaign level. For other uses of "Cartographer", see Cartographer (disambiguation).

The Silent Cartographer is the fourth campaign level in Halo: Combat Evolved.

The Covenant believe that Halo's map room, the Silent Cartographer, is located somewhere under an island, with multiple structures concealing the installation. The Master Chief leads the UNSC Marines in an assault on that island in order to locate the Control Room.

Two Pelican dropships, Echo 419, in front, and Bravo 022, in back, approach an island, low over the water. The Master Chief is inside Echo 419.

The Pelican dropships descend on the beach's corner. Covenant troops begin firing at them.

The UNSC forces move forward, and eventually the beach is cleared of Covenant hostiles. 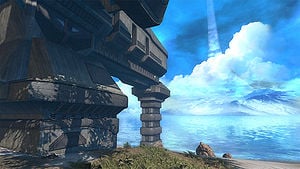 A Forerunner structure on the beach.

As the Chief boards the driver seat of the Warthog, two Marines occupy the passenger seat and the turret.

The Warthog proceeds to drive off around the island, encountering Covenant resistance. The vehicle approaches a structure protruding out of the cliff wall. A Spirit dropship beside it takes off.

On Heroic or Legendary:

They eliminate the patrolling troops outside the structure.

The Chief enters the structure and reaches the top of a slope that leads to an open door. A group of Covenant stand guard at the door, with a Sangheili Zealot blocking the way in.

The doors close as the guards, except for the Zealot, are eliminated. 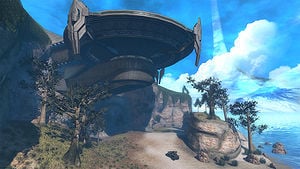 The Chief returns to the surface and explores the island on the Warthog. He eventually passes the substation, which juts out of a cliff.

They come across a path guarded by Covenant leading up into the island.

He proceeds into the facility, meeting the security override panel.

If the Security Station is entered before going to the auto-locking door to the Cartographer:

The Chief shuts down the system.

As the door is unlocked, the Zealot guard charges out, sword at the ready.

The previously locked door opens to reveal the Sangheili Zealot, who dashes out of the door in surprise, his energy sword at the ready.

The Chief moves down the hall from the security substation, towards the exit.

A group of Stealth Sangheili attempt to ambush the Chief. The Chief defeats them and heads back up.

The Chief exits the substation and sees Bravo 022's wreckage on the beach below. Marine bodies and Covenant forces can be seen around it.

The Chief returns to the entrance to the Cartographer which is now guarded by another pair of Mgalekgolo. The Chief defeats them and enters the structure again. He enters through the now-unlocked door leading to the shaft. The Zealot is not present.

The Master Chief walks out onto the platform overlooking the shaft and kicks a loose piece of debris (an Unggoy methane mask in Anniversary) down into the seemingly bottomless shaft. No sound is heard back. The Chief looks up and around.

The Chief moves farther down into the facility, wiping out any Covenant resistance. He moves into the third of four levels.

The Chief finally reaches the Cartographer, which is guarded by multiple Sangheili. The Chief soon takes them out.

The Chief activates the holo-panel.

The Cartographer hologram display begins to spin, and the diagram of Halo begins to break into sections.

Covenant reinforcements, including the Sangheili Zealot seen previously, have retaken the upper levels of the facility, forcing the Chief to fight his way back up.

The Chief reaches to the exit of the facility. Any Marines on the Warthog will have been killed by a squad of Stealth Sangheili, who the Chief quickly deals with.

The Pelican arrives. The Chief boards it.

Echo 419 lifts off from the platform and rises quickly, circling the center of the island.

Echo 419 descends into the depths of Halo.

The structure where the first pair of Mgalekgolo appeared lifts up, revealing a vertical underground tunnel; Echo 419 lowers into it as the structure returns to its original position.

Echo 419 continues to lower through the structure. The top closes with a crash.

Known as "B-30" during development, the level geometry for The Silent Cartographer went through multiple design iterations by Bungie employees, including Art Director Marcus Lehto and Environmental Artist Paul Russel.[1] As one of the first levels constructed, it was originally a testbed sandbox where Bungie tested lighting, graphics, weapons or vehicles.[2]

The level geometry was given to designer Jaime Griesemer, who then led the design on level objective and combat encounters.[1] The wave-advancing artificial intelligence for the opening beach assault, in particular, became one of the two AI scripts Griesemer and programmer Chris Butcher developed for the game, the other being the defensive AI seen throughout other levels.[3] The original objective of the level was to assassinate a Covenant Prophet who was searching for the Cartographer. This early iteration of Prophet was described as "an Elite with a funny hat". The idea was partly reused in Halo 2 campaign level Regret.[2] The Huragok were meant to appear on this level, but were removed from the game, though their tags remained in the map file.

The level was first showcased by Project Lead Jason Jones and Director of Cinematics Joseph Staten during the gameplay demo of Halo Combat Evolved at Microsoft Gamestock 2001. In the demo, John-117 arrived at the island on a Banshee, and drove a Warthog to the Cartographer facility. The Spartan ventured deeper into the facility, defeating Covenant defenses before reaching the Cartographer. When activated, the Cartographer displayed the spinning hologram that became the one at the security override station in the final game. The demo did not feature any cinematics or scripted dialogue. Instead, Staten narrated the game’s premise as an introduction while the track Truth and Reconciliation Suite plays in full as background music.[4][5]

By Halo: Combat Evolved Beta 1749, the general level design has been completed. Minor changes and additions were made prior to the final release: for example, Assistant Art Lead Steve Abeyta added a unique sitting animation for the Marine sitting opposite of John-117 in the Pelican at the beginning of the level, and artist Shi Kai Wang animated the holographic Halo ring breaking into pieces when the Cartographer was being accessed by John-117.[2]

A level was supposed to take place between this level and Assault on the Control Room, however it was cut. Instead, it was replaced by the cinematic in which Echo 419 enters the tunnel to explain the drastic change in setting from a tropical island to a snowy canyon.[2]

The events of the level were later expanded in the novel Halo: The Flood, including the appearances of two ODSTs (Hosky and an unidentified corporal) while the two Mgalekgolo at the Cartographer’s entrance were given the names Ogada Nosa Fasu and Igido Nosa Hurru.[6] The appearance of Gunnery Sergeant Marcus Stacker was substituted by Sergeant Waller.

The Silent Cartographer would be repurposed or referenced in the later Halo games. The level geometry became the basis for the Halo PC multiplayer map Death Island. In the Halo 2 campaign level The Great Journey, the landing pad of the Bastion of the Brutes heavily resembled the entrance to the Cartographer. In Halo 3, the layout of the two rooms immediately following the locked door inside the Cartographer facility were recreated by Paul Russel for the Cartographer of Installation 00 in the campaign level The Ark. Additionally, a similar shaped island can be found in the final level of Halo 3, depicted as an unfinished island that is a major feature of the landscape as the player drives along the collapsing Installation 08. The island, like the rest of the visible landscape, is still snowy, surrounded by metal structures and unfinished, but from above it is nearly identical in shape. John-117 drives around it just before the final jump into the UNSC Forward Unto Dawn. In Halo 5: Guardians, the Warzone map Raid on Apex 7 was designed as a spiritual successor to The Silent Cartographer, featuring a similar tropical island with Forerunner structures.[8]