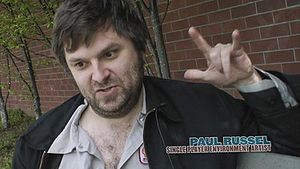 Paul Russel, father of the name "Halo", commenting on the naming process.

Paul Russel was an employee of Bungie who served as an Environmental Artist for Halo: Combat Evolved, Halo 2, Halo 3, Halo 3: ODST and Halo: Reach. He was born in 1967 in Chicago, Illinois, USA. He lived there until moving to Washington state. Russel came up with the series title "Halo",[1] and has been said to be "The father of Halo". He is largely responsible for the Forerunner and human military architectural styles and decoration in the Halo series,[2] including what is now known as the Eld symbol.[3] This has led to him being nicknamed "the Forerunner guy", although he dislikes this epithet.[2]