Sidewinder is a horseshoe multiplayer map in Halo: Combat Evolved. It was remade into the Halo 3 map, Avalanche, which was released on April 15, 2008 in the Legendary Map Pack.[1] 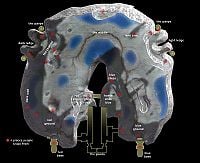 A bird's eye view of Sidewinder.

The main feature of this map is the ice patches on the front of the horseshoe in between the bases that can cause any ground vehicle without treads or hover abilities to slide, making it hard to control the vehicle, but makes a fun way to splatter enemies. On the outer edge of the map are two large cliffs that are connected to each base with teleporters. These areas are popular sniping spots, as they provide a large view and a quick route to an easily defensible area. On the inner edge, there is a network of tunnels which lead to the opposing bases. Four power-ups can be found in the lower section of the tunnel. There is a sniper rifle, two shotguns, health pack, plasma pistol, pistol and an assault rifle inside each base.

WARNING: If you attempt this glitch without an Overshield, you'll be "killed by a vehicle".

Suicides can also occur by falling through the holes on the roof of the bases, which can be difficult to see while on a Ghost.