Were you looking for the Halo 3 Covenant equipment, the deployable cover? 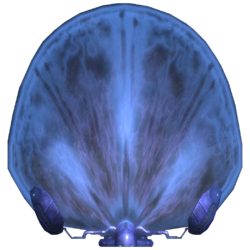 The Covenant portable shield,[1] formally known as the Pavise of the Worthy and otherwise termed as the Covenant emplaced shield,[2] or the stationary shield generator,[3] is a type of energy shielding device used by Covenant and its splinter factions for the protection of ground troops during military operations.[4][5]

Portable shields, which come in a number of models, utilize a dissipative shield generator powered by compact power storage cells to project an ovoid-shaped protective energy shield. Using gravitic anchors, the device can be robustly positioned in a desired position.[2] Essentially a larger version of the point defense gauntlet used by Kig-Yar, the shield is used as protection by Covenant soldiers in both offensive operations[6] and in the defense of strategic locations. When shot at, the shield transitions from blue to red in color before finally dissipating and eventually restoring. The shields are effective at deflecting small-arms projectiles, but struggle against explosives or plasma fire.[7]

The stationary shield generator was ubiquitous in Covenant service[2] and was used extensively throughout their war with humanity.[8][4][9]

After the conclusion of the Human-Covenant War, Jul 'Mdama's recently formed Covenant splinter faction frequently utilized portable shields in battle.[10][11] Used extensively throughout the Battle of Requiem,[10] the Requiem Campaign,[12] and the Blooding Years, the shield provided essential cover for the Covenant's soldiers.[5]

During the Battle for Zeta Halo, the Banished utilized similar portable shields.[13]

In Halo: Combat Evolved, if one of these shields is hit by a vehicle, it will be permanently disabled.[4] In Halo 2, vehicles cannot collapse them on impact.[9] In Halo Infinite, the player can manually activate and deactivate these shields.[13]