"The Horizon Tech Team just found a training program buried deep within the software of an M12S Warthog CST. Seems like some kind of evacuation exercise!"
— Rivals description

The Halo Experience Showcase is a Showcase Event in the 2018 racing game Forza Horizon 4, developed by Playground Games.

This Showcase Event, set in the Summer season, is a 5.0 mi (8.0 km) long Cross Country route, represented by the icon of the front of a D79-TC Pelican. Unlocking it requires the player to qualify for the Horizon Roster, which means the player must accumulate 285,000 Global Influence (Level 20). The event's starting point is located on the Bamburgh Castle Beach, north of the Bamburgh Castle and immediately to the left to the Bamburgh Beach Drag Strip. Completing the event gives the player base rewards of 7,546 CR and 4,651 Influence.

Once the player has completed the event at least once, they will gain access to a time-limited Winter-themed Showcase Remix variant, called Assault on the Control Room, available during the following time periods:

This version of the event features an Urban-colored M12S Warthog CST instead of the default-colored one. Completing it during any one time period it is available unlocks a Super Wheelspin as a one-time reward and adds 6% and 1.5% to the Horizon Winter Season Playlist and Series completion percentages, respectively.[2][3]

Another Autumn-themed Showcase Remix variant, called Pillar of Autumn, was introduced in Series 19 and takes place during an autumnal rainstorm. It was made available between February 20, 2020 14:30:00 GMT and February 27, 2020 14:29:59 GMT. The M12S now uses the Corp Warthog coloring for this event.[5]

Immediately after Rebecca Dawson introduces the player to the Horizon Drag Strip, the map moves to the Bamburgh Castle Beach, and the icon for the event, shown as the front of a D79-TC Pelican, is placed on it.

The camera pans around the player's current vehicle in a clockwise motion. The player can choose to do the event solo, cooperatively, or as part of Rivals. The player makes their choice.

If the event is played for the very first time.

An M12S Warthog CST appears, with the player's character performing an emote near the driver's side of it. The camera rotates clockwise around the Warthog and focuses on its front right wheel.

Only the Warthog is now seen alongside a few UNSC crates used during the Fall of Reach with health packs and a disabled fusion core next to them.

John-117 turns around to see a Pelican, with his vehicle behind him.

A SPARTAN-II clad in modified GEN2 MJOLNIR Mark VI armor is seen walking towards the Warthog, with the camera changing to show him from the front. The Spartan is revealed to be none other than John-117. He stops walking and briefly observes his vehicle.

John then turns around to see a D79-TC Pelican touch down in front of him and walks back to his Warthog while still facing the Pelican. Unintelligible radio chatter is then heard. The camera cuts back to the front of the Warthog for several seconds, and the environment is changed to show the Bamburgh Castle Beach during a minimally cloudy afternoon, with a Halo ring in the background. John is seen relaxing and idling by the driver's side of his Warthog.

If the Winter Showcase Remix version is played.

If the Autumn Showcase Remix version is played.

If the event is played for the very first time.

John drives the Warthog through the beach towards the first checkpoint, which is close to the Bamburgh Castle.

If Streamer Mode is disabled and the Radio is on.

As John gets closer to the first checkpoint, which is marked by a pair of blue signal flares, the player assumes control. Indestructible Covenant props and shield generators litter the surroundings while a pair of Banshees fly through the sky and pursue the Pelican, which is flying towards the landing zone on the beach and trying to evade the Banshees, neither of which attack. 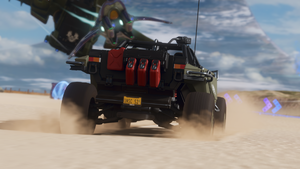 John follows the Pelican to the landing zone while being pursued by Banshees.

The Master Chief makes a right and clears the first checkpoint. He turns left and notices blue race barriers made out of hard light. He sees the second checkpoint, which is marked on a ramp made out of sand.

If the Chief makes a hard crash anytime during the event, or if someone crashes into him.

The Chief clears the gap and jumps onto the grassy terrain part of the Bamburgh Castle. The path is now surrounded by hard light barriers again, this time on both sides. Chief cuts through a narrow castle entrance and sees that the castle has been decorated with UNSC and Covenant props.

John exits the castle through another passageway and sees a Marine named Banks escaping to the landing zone in another Warthog. He turns right to reach the third checkpoint.

John follows Banks's Warthog to the next checkpoint.

John clears the fourth checkpoint, drives through the farmlands, and reaches a checkpoint close to several residential homes.

After clearing the fifth checkpoint, John then continues to follow the Pelican and gets on a public road for the next checkpoint. He sees that it is on farmland terrain and that the roads are blocked off by UNSC scenery props on the left and Covenant props on the right.

John exits the splitting road and drives his Warthog through another set of farmland, making a hard right turn to pass the seventh checkpoint, which is barricaded by a single wooden fence that he breaks through with no trouble.

John then jumps another public road, which is blocked off with construction signs and military props, and lands on farmland again. Another Marine named Stacker enters the scene from the trees to the left, also in a Warthog, just as John turns right for the eighth checkpoint.

Noticing hard light race barriers once again, John drives to the eighth checkpoint and jumps off a ramp.

As John drives his Warthog off the ramp, the two Banshees appear and perform a loop-the-loop evasive maneuver. After some time, John eventually lands on the ground and clears the checkpoint.

John continues following the event's route, this time turning left and eventually merging onto another public road, where the ninth checkpoint is located. He clears it, while still following the Marines, and takes a left detour off the road and onto railroad tracks to evade the pursuing Banshees.

The Chief continues on the railroads and reaches the tenth checkpoint, which eventually leads to a diagonal right turn that leads into grassland dominated by tall bushes. Covenant props, including drop pods, are seen splattered everywhere.

The eleventh checkpoint is ahead, situated on more farmland along with a few farmland houses. Chief reaches this checkpoint and turns his vehicle to the right to continue the event, encountering herds of sheep along the way. He once again continues following the Marines up hilly farmland to reach the twelfth checkpoint.

After passing the checkpoint, John turns left to merge onto a public road and eventually reaches a two-way highway designated M68. He takes the road on the right, which leads into a tunnel.

John approaches another ramp, jumps it, and smashes through construction signs while following Navarro. All contact has already been lost with Kilo, which is flying above the tunnels.

A Banshee flies through the tunnel, doing a barrel roll. At the end of the tunnel is a ramp two lanes wide. The Chief then drives through the ramp at full speed and flies off of it.

In mid-air, the Chief's Warthog makes a close call with the Pelican, which has now regained contact with the Spartan and his AI. Another Banshee flies to the left near the Pelican, the Chief, and his vehicle.

John drives offroad once again for the next checkpoint, which is immediately followed by a hard left turn. Another Warthog spawns in, with Chips Dubbo being the driver.

John continues following the Pelican and Marines and then turns right to reach the next checkpoint.

John realizes that time is running out and brings his Warthog to full speed for the last several checkpoints up ahead, with the next one directly ahead of him on a dirt road.

John, clearing this checkpoint, jumps the final ramp and above the Pelican. Another pair of Banshees fly past the Spartan and his Warthog while he gets a few seconds of air time.

The Chief then lands safely, getting an "Ultimate Air" Skill. He follows the route, which then leads into a sharp left turn that leads back onto the Bamburgh Castle Beach.

The penultimate checkpoint is seen, this time on the beach. John drives onto the beach, with rocks surrounding him on both sides, and clears the checkpoint. 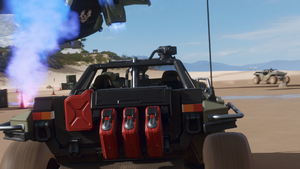 John reaches the landing zone to finish the event.

The final Marines, named Perez and Reynolds, spawn in Warthogs and reach the landing zone, which is near the Thatch Corner house. The finish line, marked by three pairs of blue signal flares, is seen at the landing zone up ahead. John uses full throttle to push through.

John crosses the finish line. A blank white environment with a reflective floor appears, with military crates and traffic cones present, along with John's Warthog and the Pelican. He is seen driving out of the scene as the event's results are brought up.

If the Winter Showcase Remix version is completed for the first time.

The event ends, with John looking at a large screen detailing the player's earnings from the event, as well as a Horizon Wheelspin and/or Horizon Super Wheelspin if available after leveling up and/or completing any one of the Showcase Remix versions for the first time.