Gunnery Sergeant Reynolds is a staff non-commissioned officer[1] and an infantryman in the UNSC Marine Corps during the Human-Covenant War.[2]

Reynolds enlisted in the UNSC Marine Corps at some point before 2552. By November of that year, he had risen to the rank of Gunnery Sergeant, and was participating in the Battle for Earth.[1]

"Johnson, you be advised, Hostiles are on the move... I've got eyes on a Brute Pack, over."
— Reynolds alerting Sergeant Major Avery Johnson of Covenant activity. 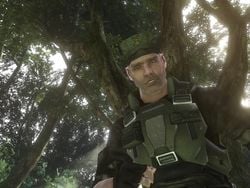 Reynolds jumping down from the log bridge after being saved by John-117 from the Jiralhanae Captain.

On the morning of November 17, 2552, Reynolds accompanied Sergeant Major Avery Johnson and fellow Gunnery Sergeant Marcus Stacker as they led a Platoon-sized force of Marines into the jungles near Mount Kilimanjaro. The force was tasked with retrieving Spartan John-117, who had crash-landed in the area after exiting the Prophet of Truth's Forerunner Dreadnought, in the middle of re-entry. Reynolds and his his squad were searching for John-117 when Johnson made contact, informing him the Spartan had been located, and ordering Bravo Team to retreat to the extraction point at the nearby river. As his squad observed Covenant forces on the move towards the main Marine force, Reynolds promptly alerted Johnson of the heightening Covenant activity. However, doing so gave away his position and his squad immediately came under attack by a Phantom dropship and Jiralhanae Chieftain, resulting in his entire squad being killed and Reynolds himself captured.

Reynolds was interrogated by a Jiralhanae Captain. The Covenant soldier held him atop a log bridge and demanded the location of the UNSC base Crow's Nest, but Reynolds' only response was "kiss my ass." Just as the Jiralhanae braced to kill him, John 117 arrived, accompanied by Thel 'Vadam and Sergeant Stacker's First Squad. After the Spartan swiftly dispatched his captor, Reynolds jumped off the bridge, grabbed a nearby assault rifle and informed the Spartan of Bravo's fate. Reynolds then joined the Spartan in his mission to rendezvous with Sergeant Johnson at the extraction point. As they arrived however, Johnson's Pelican and it's escort were both shot down by Covenant Banshees. Reynolds continued to support the Master Chief and Arbiter as they pushed through the jungle and eventually rescued Johnson, who had been captured by the Covenant. After neutralizing all Covenant present, including a Jiralhanae Chieftain, the UNSC forces were evacuated to Crow's Nest.[1]

Upon returning to Crow's Nest, the UNSC forces soon found out that they had been discovered by the Covenant, and were going to be attacked. Knowing that the base would likely be overrun, the Marines, led by Commander Miranda Keyes, begun to prepare a massive bomb intended to be detonated to deny the Covenant the base.[2]

Reynolds ultimately survived the destruction of Crow's Nest by taking refuge in the base's motor pool. Rallying the surviving Marines in the area, Reynolds destroyed a security camera that may lead surviving Covenant forces to them. Rendezvousing with John-117 once again, Reynolds ordered any of his men that could still walk to take the surviving Warthogs in the motor pool out of the base. They aided a group of Marines call signed Second Squad who were under attack by Covenant scouts near the base entrance and allowed them to mount up. Reynolds continued to try hail Commander Keyes but was unsuccessful, as the COMs had been scrambled by the destruction of Crows Nest.[3]

Reynolds and his troops soon received a distress call from Sergeant Stacker, who had been leading a convoy intended to bring supplies to the beleaguered UNSC forces in Voi. The convoy had been strafed by Banshees and were pinned down by a large Covenant ground force. Fortunately, Reynolds and John-117 arrived in time to rescue the survivors and clear out the Covenant presence. The UNSC convoy continued onward, but were forced to leave their vehicles shortly after, stopped by a destroyed section of the highway. Continuing on foot, Reynolds, Stacker and their men helped John-117 liberate another squad of Marines under attack in a nearby building complex. After holding off many waves of attacking Covenant troops, including a Wraith tank, several resupply Pelicans moved in, delivering multiple Warthogs and reinforcements. Mobilizing once again, the UNSC forces punched through a sizable Covenant vehicular force and breached the final Covenant roadblocks, clearing a path to Voi. 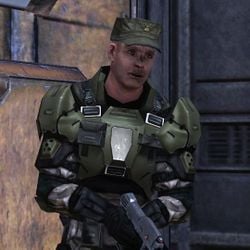 UNSC forces lead by Reynolds and Stacker supported John-117 in the assault on Traxus Factory Complex 09 in South Voi.[4][Note 1] There, they eliminated a heavy Covenant presence, including multiple Anti-Aircraft Wraiths and a Scarab. After liberating the exterior of the complex, Reynolds entered the forward operating base located there, while other UNSC forces aided John-117 and the Arbiter Thel 'Vadam in fighting through the factory interior.[Note 2]

Later, when the Flood-controlled battlecruiser crashed in the area, Reynolds lost multiple squads of Marines to the arriving parasite before John-117 and the Arbiter returned to the factory complex. As he ordered all Marine forces to retreat into the warehouse complex, his squad was overwhelmed by Flood descending from the nearby rooftops. Reynolds was set upon by a pod infector, and was infected. One of Reynolds' own Marines was forced to gun him down, lamenting that the resulting creature was no longer their Sergeant.[5][Note 3]

Despite his apparent death, on March 3, 2553, Reynolds was present at the the Voi Memorial. Here, he led six other Marines (for a total of seven) in a three-volley salute, in tribute to the lives lost in the Human-Covenant war. Curiously, his picture was also seen on the memorial.[6][Note 3]

In-game, Reynolds behaves and acts just as any other Marine NPC would, though like other Marine Sergeants, he will sometimes pause to shout and motion orders to other Marines. The player can trade weapons with him, and he can be killed during the course of gameplay. If he is killed, he will reappear in later appearances regardless, even within the same level.

Reynolds was voiced by Hollywood actor Nathan Fillion, best known for his role in the canceled Fox TV series Firefly and its spin-off feature film Serenity. In Firefly, Fillion plays the captain of the spacecraft Serenity, named Malcolm Reynolds, after whom Gunnery Sergeant Reynolds is named. Both Adam Baldwin and Alan Tudyk, who also starred in Firefly and Serenity, also voiced UNSC Marines in Halo 3. The trio would go on to voice Edward Buck, Taylor "Dutch" Miles and Michael "Mickey" Crespo respectively in Halo 3: ODST, with Buck reappearing in two futher games: Halo: Reach and Halo 5: Guardians.

Reynolds has a scripted death on the mission Floodgate.[5] However, he can still reappear in the two following missions, The Ark and The Covenant as a random NPC without any scripted dialogue.[7][8] He also has a scripted line of dialogue in the game's epilogue.[6] This is likely simply an oversight on the part of Bungie, but as a result, the canonical status of his death is unclear.