This article is about the Seraph seen in Halo 2 and Halo 3. For Seraph model seen in Halo: Reach, Halo 4 and several other sources, see Morsam-pattern Seraph.

The Kai-pattern Heavy Strike Fighter was one of the main design patterns of the Covenant's Seraph space fighters, alongside the Morsam-pattern.[1]

The Seraph features a piscine, teardrop-like shape, fitting with the overall design elegance the Covenant is known for. Seraph fighters are mostly stored in the hangar bays of Covenant ships or stations when they are not in battle or escorting a ship. The Kai-pattern is equipped with a multiphase energy shield, although this does not seem to always be the case.[2] The shields also reinforce the craft's inertial compensators, absorbing energy from impacts that would rip other craft apart.[1] Seraph hull plating self-repairs when damaged, adjusting to compensate for lost aerodynamic features during combat.[1] The tail assembly acts as a thrust vectoring system, increasing its maneuverability by redirecting the impulse drive exhaust. However, the tail of a Kai-pattern Seraph isn't physically articulate in the way that the Morsam-pattern is. Power can be temporarily diverted from other systems in order to give the fighter an acceleration boost.

Though not specifically intended for atmospheric use, Seraphs still are significantly faster than Banshees while flying at low altitudes. They have even been shown to fly in the hurricane-force winds of the gas giant Threshold.[3] The Seraph's control pod offers reinforced, armored protection for the pilot, containing the multi-port connectors to fit the pilot's combat harness.[1] Seraphs are controlled via a direct neural interface with their flight harness, using minimal safety cutouts and filters. While the pilot's body is rendered immobile to reduce the risk of injury, they control the ship with their thought, in much the same way as a UNSC pilot's neural interface.[1] Unlike UNSC systems, however, this method induces significant pain called interface burn in the pilot. Elites enter a meditative state before they complete an uplink to control the pain, while Brute pilots embrace the pain to trigger their own focus.[1]

The Kai-Pattern Seraph wields four Tevaas Mu-pattern heavy plasma cannons,[1] as well as 2× Novox-pattern Fuel rod cannons.[1] These plasma cannons are fired in twin-linked pairs which are offset at angles in order to maximise the starfighter's peripheral coverage. Gravitic mirrors installed around each of the cannons provide aiming and focus for each volley.

Kai-pattern Seraphs saw operational use throughout the Human-Covenant War.[4] These starfighters provided excellent fire support to all Covenant forces in space and groundside. Seraphs were organised into squadrons (Talons) of eight or more craft, which would split into hunting pairs when on a mission.[1] Elite pilots considered piloting a Seraph merely a means to attain enough glory to be reassigned to a ground combat position, valuing their fighters only as tools to accomplish this. Despite their extensive training, their honor code gave them a tendency to peel off from their squadrons to engage in one-on-one dogfights, making them vulnerable in combat. Brute pilots were excluded from such training, but their pack mentality and rigid social hierarchy made them far more effective teams. Human pilots soon learned to fear Brute-piloted Seraphs, identified by clan markings and Forerunner symbols carved on their hulls, more than Elite-piloted Seraphs.[1] Kai-pattern Seraphs were prominently used during Operation: WARM BLANKET, the Battle for Earth.[5]

During the Raid on the Threshold gas mine, Sesa 'Refumee tried to escape on a Seraph after Arbiter Thel 'Vadamee severed the cable holding the gas mine suspended in Threshold's atmosphere. Though 'Refumee reached the fighter, the Arbiter intercepted him in the hanger and killed 'Refumee before the Heretic Leader could make his escape. The Seraph was abandoned in the gas mine and destroyed shortly thereafter with it.[3]

During the Battle of Installation 00, the Prophet of Truth's fleet deployed numerous Seraphs against the UNSC/Sangheili fleet in an effort to stop them from landing ground forces on the Ark. The Seraphs shot down a few Pelicans, but could not stop the others from breaking through.[6] The Seraphs were presumably destroyed along with the rest of the Covenant fleet. 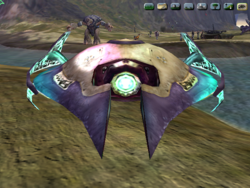 The Combat Evolved-era Seraph, then a Covenant tank.

During the development of Halo: Combat Evolved, what would become the Kai-pattern Seraph was originally developed by Shi Kai Wang as a Covenant tank unit in 1998.[8] The Seraph, fully modelled and textured, was present in the 2000-era builds of Combat Evolved when the game was still a third-person game. The model seen in this early build featured "wings", though was ultimately one of the many vehicles cut from the game as development progressed. The model was later reused in the Halo 2 levels The Arbiter and The Oracle, featured as a starfighter in the Threshold gas mines - though without the wings present in the original design. Despite this, the model found in Halo 2 uses the exact same textures as the original.[9]