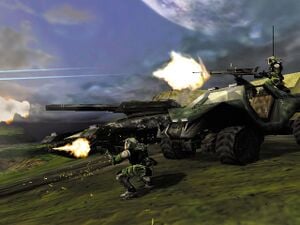 This article is part of a series on
Halo: Combat Evolved cut content

During the development of Halo: Combat Evolved, the game went through many different styles including a strategy game, a third-person shooter and a first-person shooter. Throughout these iterations, many different vehicles were cut from the game, some of which presented notably different design styles from those found in the final 2001 release.

These vehicles were present in the early stages of the development of Halo, when the game bore little resemblance to the final product. In this era, prior to 1998, the design of the human vehicles bore a notable resemblance to those found in the modern-day, with conventional-looking Humvees, tanks and attack helicopters.

In the RTS era of Halo, the Covenant did not exist yet as an entity, simply being the "aliens". There were to be several vehicles used by what would later become the Covenant and Forerunners.[1] A later variation of the alien tank, created in 1999, features the vehicle in the Covenant's purple color scheme.

The fighter pod was a vehicle intended for use by alien forces.[2]

Not to be confused with a cut level of the same name from Halo 2, the Forerunner Tank as intended for the first Halo game was concepted by Marcus Lehto as a heavy vehicle intended for use by the Forerunners. At this point in time around 1998, the Forerunners were little more than an idea, though the intention was for the Forerunners to still be alive in the active setting of the game.[3] Lehto designed the tank to contrast the art direction of the existing Covenant and UNSC tanks, with the tank design focused on asymmetry and unique forms.[4][5] Lehto visualised the vehicle as coloured an "off-white" like an "old skull", with weathered "dried blood-red" accent colours.[6][7]

When firing, Lehto visualised that the vehicle would fire a short-burst energy beam projectile, with an additional burst emitting from the back of the vehicle to counter recoil.[8]

A number of various armoured vehicle designs can be seen in many of the released RTS-era screenshots. Little information is known about most of these vehicles, and are such presented collectively in the below gallery.

The Hummer - labelled in-game as the "scoutcar" - resembles a modern-day Humvee, and was eventually "sort of" replaced by the Warthog.[9] The vehicle featured a pair of roof-mounted machine guns.

The third-person shooter era of Halo was characterised by the evolution and development of the Warthog. In the game's RTS stage, a third-person camera and driving controls were added to the Hummer vehicle to test the game's physics and terrain technology. Ultimately, the developers found driving the vehicle so fun that by late 1998 and early 1999, the game had transitioned into third-person format. The Warthog was a key aspect of this era of Halo, though was accompanied by a vast assortment of other vehicles.

Various watercraft were concepted and tested for inclusion in Halo, though ultimately none made it into the final release. One such vehicle was present in the earliest builds of the game, described as a single-man vehicle named the "Doozy".[10] Another watercraft was cut from the game due to being "kind of pointless" and described as a floating dinghy looking like "two floating carrots".[9] At this time, entering the vehicle would simply move the player model under the vehicle - the boat had a buggy physics engine, and was prone to bouncing out of the water.[1] It may be possible that the "Doozy" and "Carrot Boat" are one and the same.

A vehicle named the Doozy lives on in Halo canon, but as a snowmobile rather than a watercraft.

Concepted by Shi Kai Wang and modelled/textured by artist Paul Russel, this vehicle was to be a large bomber aircraft used by the Covenant, measuring 12m wide and 10m tall.[12] It was presumably meant as a heavy aerial weapons platform, a supplement to the smaller, lighter Banshee, but was cut from the released game. It featured two forward-swept wings, akin to the twin booms of the Spirit dropship, and had a long protrusion underneath, which may have been an underslung weapons mount or landing gear.

Known in-game as c ground transport, this vehicle would later go on to be featured in Halo 2 as the Shadow.[13]

This design for a Covenant tank was featured in these builds of Halo: Combat Evolved, and was built in 1998.[15] The design was later reused as the Kai-pattern Seraph later featured in Halo 2.

Interestingly, the original textures for this 2000-era tank remain in the files for Halo 2, allowing the full model to be recreated via modding.[16]

"Helicopters were a featured item by the time Halo evolved into a third person shooter but in retrospect, they're simply not futuristic enough. Although it could be worse, they could be hot air balloons or -blam!-ker Triplanes. Maybe for a prequel, they might go Retro. I can see it now, a World War One and Two themed action strategy shooter, called Halo: Alsace Lorraine Panzer Division Edition. Or then again, maybe not..."
— Frank O'Connor[9]

At one point in the game's third-person builds, a vehicle resembling a modern attack helicopter could be seen, though was cut as helicopters weren't "futuristic enough".[9] Perhaps ironically, they would later be heavily featured in Halo: Reach as the Falcon.

The Kestrel was a human aircraft of some kind that was modelled for inclusion in Halo. Little is known of the vehicle's intended role within Combat Evolved.[17] The vehicle was cut in-part because Combat Evolved lacks vehicle physics that can effectively simulate VTOL aircraft.[11][18] The vehicle was later concepted for (and also cut from) Halo 2, before eventually being brought to life as a MEGA Brands set. The vehicle would then go on to see its in-game debut in 2015's Halo: Spartan Strike as the AV-30 Kestrel. The original version of the vehicle would later be canonized as the JOV-99 Kestrel.

Concepted at some point by Marcus Lehto, this mech was described as being a "personal mech". No known depictions of this model in 3D exist.[19][20] A similar concept would later make its way into Halo with the Cyclops in Halo Wars and the Mantis in Halo 4.

Known as the "Shadow" in this stage of development, this vehicle would later evolve into the Spectre seen in Halo 2. The cut Combat Evolved Shadow would later be canonized as the Wuchek-pattern Spectre.[9]

Described as a "low-black Scorpion"[9] and featuring "counter vented fire stablization", the stealth tank was a human vehicle present in the game's third-person era and fully-drivable.[21] The vehicle was intended as a counterpart to the existing Scorpion, being lighter and more agile with a lower profile, but more vulnerable to enemy attacks due to having less armour.[22]

The Stealth Tank was cut before the game moved to development on the Xbox console.[23] As part of 343 Industries' Digsite Alpha initiative to uncover and restore cut content for Halo: Combat Evolved, the stealth tank has been canonized as the M700 Viper.[18]