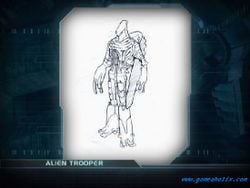 Alien troopers are a deleted Covenant species seen in the Halo 2 Collector's Edition DVD.[1] It is unknown exactly what this seems to be. The only data known is that it carries its weapon under its belly, and was a precursor to the Hunter in this aspect. It bears a small resemblance to Elites.