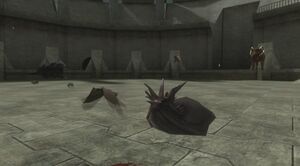 "You might be thinking to yourself, “Wait! Ambient life is really important!” but the cold, hard truth of the matter is that adding the correct animations for this little guy might impact other, way more important aspects of the game. It’s gotta go."
— Eric Osborne discussing the porcupine.[1]

This article is part of a series on
Halo: Reach cut content

During the game's development, Halo: Reach was intended to feature a large variety of ambient life to populate the wilderness of the titular planet. The fauna covered on this page are one of many examples of cut ambient life in Halo games.

A look at some of the ambient life cut from ''Reach'', in motion.

Concepted by Isaac Hannaford, the Gúta went through several revisions and rounds of development before reaching the form found in the final game. Early ideas showcased the creature as potentially being ridden by Jackals, with later in-game prototyping exploring the ideas of Elites and Grunts riding them.[2] Later ideas suggested the Gútas were to have fur on their backs and arms - something that was conceived and modeled, though ultimately scrapped.[3]

Early code for the creature (named "mule" in-development) suggests they were to have an acid spit attack[4], while another similar prototyped mechanic had the Gúta "vomit hot rocks".[2] Another possibility tested in development was for the Gúta to have shoulder-mounted cannons.[2]

Prior to their downscaled role in the game, the Gúta were intended to be in two other missions alongside Nightfall. Alongside the ability of the Covenant to ride Gutas, some explorations were done for them to be ride-able by the player - and for the player to be able to board the Gúta by climbing up its back and kill it by planting a grenade in its mouth.[2]

The hawk was a bird included in Reach, where it can be found in the sky during the mission Winter Contingency. It was modelled and textured by artist Zeke Garcia.[5][6] This bird is presumably the "eagle" mentioned by Bungie during the developer commentary for Reach; the original intent for the game's Legendary difficulty ending would see the bird fly down and land on Noble Six's helmet, during Halsey's narration.[7] A number of other similar birds can be found in other levels.

The hawk showcased in the early development images below displays some subtle changes from the one featured in the final game, having no legs and a more reddish hue. 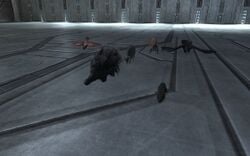 The porcupine was a creature intended to inhabit Reach. It was ultimately cut due to animations issues in which the creature would only float above the ground, with little time to fix prior to Zero-bug release.[1]

A creature resembling a goat was present in the tags build, though ultimately cut. Little else is known of it.[8]

The Spadehorn was originally to appear in Halo: Reach as ambient wildlife. [9] Concept sketches were created for eight different varieties of the creature; the Highlands Spadehorn, Prairie Spadehorn, Angelhorn, Ringhorn, Hammerhorn, Pryhorn, Devilhorn, and Godhorn, each with different shaped horns. Spadehorns were intended to have an unusual genetic adaptation - horns that are flat and tough rather than brittle and pointy like those of their Earthbound cousins. The shovel-like horns were intended to dig through the rocky or frozen soil in Reach's boreal regions, though some variations were used instead to carve moss or lichen from sheer rock, or strip the bark from Reach's indigenous trees.[10] Spadehorns did keep their place in Halo canon, serving as the in-universe namesake for the Spade truck drivable in-game, and later being recreated in Halo Mash-Up: Minecraft Evolved.

"Marcus, we cut the porcupine, but we saved the squirrel."
— Bungie developers reporting the squirrel's survival of early bugtesting to Marcus Lehto.[1]

The squirrel was a creature intended to inhabit Reach, and exists in the tags build complete with textures and idle animations.[11] At some point, the porcupine was cut from the game so the squirrel could live, though the squirrel ultimately never made it to the final release, having been cut several weeks later.[1][12]

The slug was another creature intended to inhabit Reach. The creature was modelled by artist Zeke Garcia, and was fully textured and animated before it was cut.[13] The slug was (possibly jokingly) mentioned by Bungie as intended to be used in the game's Legendary ending.[7]