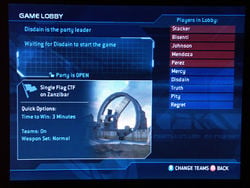 The game lobby with the name

The Prophet of Pity is a Prophet who is only known from a Halo 2 match held at an E3 demo. In it, players used premade accounts with the names of Halo characters. One team played as Spartans and used Marine names, the other team as Elites and using Prophet names, including "Pity".[1]

It is unknown whether this character had been planned for Halo 2, but it seems the Prophet never made it into the final game.