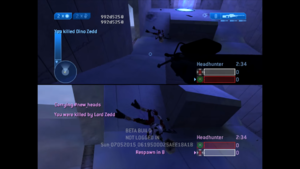 A match of Headhunter in progress in the Halo 2 Beta.[1]

During the game's development, Halo 2 was planned to ship with many more game modes which ultimately did not make it to final release. A handful were prototyped in engine, though the majority only ever existed in paper design documentation penned by the team at Bungie - notably multiplayer lead Max Hoberman. As such, the majority of these modes were never practically developed in any way.

The following modes were to some extent prototyped and implemented in-engine.

The main mode developed and ultimately cut from Halo 2, Headhunter was to take a very similar form to the gametype of the same name ultimately featured in Halo: Reach. When dying, players were to drop skulls which could be collected by other players and deposited into safe zones. Headhunter was in the files of the Halo 2 Alpha and mostly-functional, but was ultimately cut likely due to a bottleneck in user interface design and deployment as opposed to issues with creating the mode itself.[2][3]

The Juggernaut mode was shipped with the final build of Halo 2, though in a very different manner to which the design documentation conceived. The original plans for the mode were to involve the Flood Juggernaut, an enemy type intended to appear in the campaign of Halo 2 as a massive Flood boss (and the mode's namesake). In this original specification, the player playing as the Juggernaut was to physically play as the Flood Juggernaut, intended to be "sturdier, heavier, can do more damage and jump twice as high". Instead of weapons, the Juggernaut player was to have access to both of the Juggernaut's tentacles to use for melee attacks coordinated with the left and right triggers. Using the triggers near scenery props would throw the prop at enemies.[3]

This original plan for the Juggernaut mode was ultimately scrapped as Hoberman was never able to get the development manpower needed to put the mode into action. The final Juggernaut shipped with a toned-down premise, featuring one strong player being hunted by the other players.[3]

"Complete the required number of laps before your opponents, blowing away the competition."
— Official description in the Halo 2 Alpha.
Main article: Race

The Race gametype first debuted in Halo: Combat Evolved, with a simple premise - be the first player to reach all of the checkpoints on the map. The mode was to some extent considered for inclusion in Halo 2 and was implemented in the gametype selection menus for the Halo 2 Alpha, though in the menus uses the icon and description for the Assault gametype. Selecting the race option brings up the proper icon and description.[2]

Originally concepted in Combat Evolved and scrapped, Warfare was intended to be the primary multiplayer offering of Halo 2 - a massive-scale Spartan vs. Elite asymmetric battle. The mode was the primary one considered at the beginning of Halo 2 production, though was ultimately cancelled due to development troubles, with Max Hoberman and his team instead focusing more on the game's smaller-scale gameplay.[3]

The following gamemodes were considered for inclusion in Halo 2, though never saw any serious development or engineering work to get them implemented in-game.

A revival of the "Kill In Order" mode from Halo: Combat Evolved, the goal of Assassin was to be simple; periodically, the game would designate a player as a target. While other players in the game could shoot and kill one another, points would only be scored for killing the player targeted by the game. The mode was written out by Hoberman in design documentation, though never saw any implementation in-game.[3]

"The Light Bringer" was a gametype mentioned in a design document penned by Hoberman, c. November 2003. The mode is similar in concept to Juggernaut; at the start of a mission, a cut power up referred to as the "quad" was intended to spawn somewhere on the map. The player who picked up the quad would then gain the effect of dealing quad damage to all enemies as long as they remained alive, gaining 10HP back with each successful kill. Upon their death, the player in question would drop the quad, allowing it to be picked up by anyone; the player or team holding the quad at the end of the match wins. To help give players an additional chance to pick up the quad, the round timer would be extended by thirty seconds each time the quad was picked up.[4]