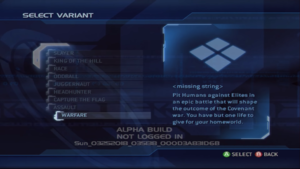 A screenshot of the Halo 2 Alpha with the Warfare mode in the menu.[1]

"Pit Humans against Elites in an epic battle that will shape the outcome of the Covenant war. You have but one life to give for your homeworld."
— Official description in the Halo 2 Alpha.[1]

Warfare was a large-scale multiplayer gamemode intended for inclusion in Halo: Combat Evolved and later, Halo 2 - though was ultimately realised in neither.[2]

During the development of Combat Evolved, the team at Bungie had prototyped elements of a large-scale multiplayer mode featuring Marines taking on Elites, in an immersive and round-based setting. The mode would have been asymmetric with an attack versus defense interplay, with maps that were more "strategically designed" to feature different kinds of objectives to attack. This design was intended to focus on control points, with attackers able to choose different kinds of locations to attack.[3]

Warfare received some light prototyping while Bungie was still based in Chicago - prior to their acquisition by Microsoft in mid-2000.[2] Ultimately, the scramble to finish Combat Evolved's campaign meant that very few resources were available for the multiplayer component, resulting in Hardy LeBel creating the final arena-style multiplayer almost single-handedly. Because of this, the design team fell back on what they knew from their experience working on the multiplayer mode for Marathon, and ultimately shipped a more traditional arena experience. However, the larger scale did make it into the game, with maps such as Blood Gulch and Sidewinder containing larger scale vehicle gameplay.[3] 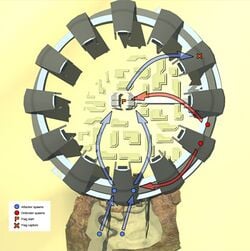 "“We still have the multiplayer game-types that people loved in ‘Halo’, but we’re planning something special for multiplayer in ‘Halo 2,’” hinted Jaime Griesemer, “Halo 2's” lead designer. “I don’t want to ruin the surprise, but imagine the essential ‘Halo’ single-player experience: pitched battles between the humans and the Covenant, massive vehicle and infantry engagements. Now imagine that every combatant is an actual person playing over Xbox Live!”"
— An excerpt from the original Halo 2 press announcement, referencing the then-in-development Warfare mode.[4]

Following on from Combat Evolved, Warfare was once again reconsidered for Halo 2's multiplayer, with the majority of the team at Bungie pursuing it as the game's primary multiplayer component - intending to realise what they had envisioned for the first game. A design document was written by Jaime Griesemer containing three top-down paper map designs for the mode. Seeing that the plan for Halo 2 was to only ship the larger multiplayer experience, Max Hoberman protested the change due to how popular Combat Evolved's multiplayer had become in the LAN setting. Hoberman was eventually able to make his case such that Alex Seropian and Jason Jones eventually greenlit Hoberman to lead the development of a traditional arena-style multiplayer to supplement the larger scale battles that Warfare was to offer.[3][5]

At this time, Hoberman and Chris Carney were designated to work only on the small-scale multiplayer mode for Halo 2 - focusing on small playercounts such as 2v2 or 4v4, with no consideration for Big Team Battle modes due to the ongoing development of Warfare. This was partially due to the fact that in 2001-2002, the majority of the US did not have broadband internet to support online play, meaning a huge market was still left for traditional split-screen and LAN games.[3][5]

Six months later in 2003, the three-page design document written by Griesemer was still all that had been made for Warfare, and very little active development had been done on it (in part due to the development troubles which plagued Halo 2's campaign). By March 2003, Hoberman was approached by Jason Jones and his arena team integrated back in with the main Warfare multiplayer team and Hoberman made the lead for the entire Halo 2 multiplayer. At this time, the Warfare mode was officially cancelled, and work instead began on creating a series of large maps for the arena multiplayer to add a large-scale element akin to Combat Evolved.[3][5] The ability to play as Elites in the multiplayer did ultimately make it into the final game.

Although the mode was ultimately cut, it was referenced in magazines discussing the game, making mention of "supporting events" such as the ability to call in an air strike.[6] The mode was intended to support 32 players, though whether this was actually feasible or possible is something Bungie had never explored in-depth.[7] The Warfare mode was still in the menus of the Halo 2 Alpha, containing a description though was not selectable.[1]

In design documentation created by Hoberman for Halo 2, he co-opted the name "squad" from the Warfare mode to refer to what would eventually become known as a party of players. By July 2003, documentation still referenced the possibility of Warfare making it into retail.[8][9]

Halo 5: Guardians' large-scale mode Warzone has been likened to Warfare.[5]

Although stated by Hoberman as having no relation, the described concept of Warfare is strikingly similar to the Invasion gametype which did eventually ship in 2010's Halo: Reach - though by this time Hoberman had left Bungie to found Certain Affinity. [10] Notably, Reach did see the return of another multiplayer mode cut from Halo 2 - Headhunter.

A similar concept to the Warfare mode was also considered during the development of Halo 3. Early design intent by Justin Hayward for the multiplayer map Sandtrap was to make a map supporting an asymmetric attack/defense mode, with the attacking team pushing into the "bowl" that would become the Sandtrap map in the final game.[11]

The Warzone mode later featured in 2015's Halo 5: Guardians was later likened to the design intent for Warfare.[5]