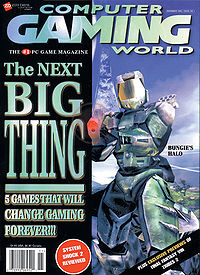 Before Xbox, and before the release of Halo: Combat Evolved, there was a game that was originally announced for the Mac and the PC as a 3rd-person shooter, simply referred to as Halo.[1] The game development time was from around 1998 to the release of Halo: Combat Evolved, originating as a Myth-style strategy game before turning into a third person shooter, and finally being retooled as a straight-up FPS for the Xbox console. As the game evolved, several vehicles and weapons were cut and others had complete overhauls. Below are some examples of lost or heavily modified gameplay items.

Originally, Halo was going to be made an RTS for the Mac. Bungie employees had considered this version of Halo to be a clone of Myth with a Sci-Fi skin over it.[2] At some point, the entire game was redesigned, but was still an RTS.

At some point during development, Halo was to be a continuous RPG.[2]

Eventually, Halo became a 3rd person action game. These builds of the game are much more similar to the final product than previous builds. Very early versions of the 3rd person version of Halo used many assets from the RTS version.

The weapons of this build of Halo used names that were inspired by the Marathon series.[3] All weapons were named by Robt McLees.[4]