"All that stuff was going to culminate and end on Earth. And it was going to be the end of Halo. We had no plans to do another game after this. It was like: this is how Halo ends."
— Martin O'Donnell describes the intended Earth Ark level.[1]

"Earth Ark" was the working title for a series of three campaign levels cut from Halo 2. The three missions would have served as the penultimate in the game, showcasing the Master Chief's return to Earth and the final stand of the Prophet of Truth.[2]

While making Halo 2, Bungie developed pairs of levels under single names - such as Outskirts and Metropolis being originally created as one level named "Earth City". Earth Ark was seemingly similar in this regard, seemingly intended to comprise of three individual missions in which the player would alternate between playing as Master Chief and the Arbiter (then-known in development under the name Dervish).[3] 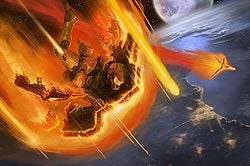 While the Master Chief's re-entry sequence would be cut from Halo 2, it was later re-concepted by Dorje Bellbrook for Halo 3.

In the first of the two levels under the "Earth Ark" heading, the player would play as the Master Chief. The mission would open with the Spartan aboard the Prophet of Truth's Forerunner ship as it emerged from slipspace over Earth, having just escaped the Fall of High Charity to the Flood. Master Chief was to communicate with Lord Hood, before using a grenade to blast a porthole off the Forerunner ship and jump out of the ship over Earth.[4]

On Earth, the next cutscene would depict a group of Marines fighting in the deserts of East Africa, besieged by Brute forces and their artillery cannons. In the distance can be seen a mysterious Forerunner structure - the Ark.[4] In this early revision of Halo 2, the Ark was to be a Forerunner structure buried under the city of New Mombasa, and by this point had been excavated by the Covenant fleet in the wake of the departure of the Prophet of Regret earlier in the game. The design for the Ark as envisioned in Halo 2 was later reused in Halo 3 as the Portal at Voi - now a portal used to access the megastructure known as Installation 00 outside the Milky Way.

From the Marines' perspective, the Forerunner ship would rocket overhead followed by an explosion of dust behind the Marine group. The Marines ready their weapons as they turn around, only to be greeted with the sight of the Master Chief emerging from the dust cloud, having landed on Earth successfully. The Marines then reunite with a boost of morale and begin to charge the Covenant forces - with gameplay beginning here.[4]

The gameplay for this level is not fully clear, as little has been revealed of what was intended. However, a handful of comments by Joseph Staten indicate that the geometry for the Ark was fully blocked out and in some way implemented in-game. The level was to involve a fight with two Scarabs - something later seen in storyboards for later revisions of The Great Journey before ultimately being realised in Halo 3's The Covenant mission. Like Earth Ark, the dual-Scarab encounter on The Covenant features the player battling the two walkers in the last stand of the Covenant.[1]

Storyboards for a cutscene in the middle of Earth Ark then showcase the Master Chief cresting a rise on the edge of the Covenant's excavation site, revealing an army of thousands of Brute warriors ready for a fight. The Brutes let out a mass roar and the Marines and Master Chief ready their weapons for a final stand, though are interrupted by the appearance of a Covenant fleet above the Ark site. The fleet begins firing down upon the surface of the planet, though it is quickly revealed that the Covenant ships are not Brute ships trying to kill humanity, but Elite ships firing down upon the Brute army - clearing the way for the Master Chief. In response to the bombardment, seven pillars rise out of the ground and begin to cast a protective energy shield over the Ark to protect it from the bombardment. Seven Phantom dropships then head toward the Master Chief's position as the shield continues to grow, attempting to enter the Ark before the shield can form a full dome and prevent all entry or exit. One of the dropships is revealed to be piloted by Sergeant Johnson and Miranda Keyes, who narrowly make it through the shield as the trailing three dropships crash into the shield. Keyes' and Johnson's dropship then lands near the Master Chief while the others - containing the Arbiter and 343 Guilty Spark - descend into the trench around the Ark site.[4]

When describing this level, Joseph Staten also noted that the level would have featured a "trench run" for the player to make their way onto the Ark. It is unclear whether this trench run was intended to refer to the aforementioned Phantom cutscene, or whether it was intended to include a new gameplay element following the Arbiter's Phantom disappearing into the trench.[1] After the end of the aforementioned cutscene, the player was to switch to the perspective of the Arbiter for the final mission of Halo 2, possibly including some combat inside the Ark. The next set of revealed storyboards showcase the interior of the Ark, with the Prophet of Truth scrambling to activate the Halo Array. Truth and the Arbiter would have a brief dialogue concluding in the Arbiter removing his helmet and throwing it to the ground near Truth, before raising his weapon and pointing it at the Prophet. Gameplay would then commence with a final boss battle against the prophet. During the dialogue, the Master Chief and 343 Guilty Spark would arrive in the control room, possibly indicating that the Master Chief would serve as an NPC ally in the encounter.[4]

After the defeat of Truth in gameplay, the Arbiter would proceed to snap Truth's neck as Master Chief walked up to the Ark console, intending to deactivate the Halo rings. After pressing some buttons, the cutscene was to show the energy shield surrounding the Ark failing and the pillars surrounding the Ark unfolding to reveal several large energy cannons. Of the seven pillars, only five do this to represent the five active Halo rings - with Installation 04 and Installation 05 having been destroyed. The cannons then fire several energy bolts up through Earth's atmosphere (with one knocking out a Covenant cruiser) and to the other Halo rings. One such bolt would be shown intercepting Installation 03 - which is preparing to fire - with the ring then deactivating. The Ark then begins collapsing in on itself and the Master Chief-Arbiter pair prepare to follow 343 Guilty Spark and escape the structure once and for all. However, they are stopped as a squad of Brute Honor Guards enter - Master Chief nods the Arbiter to follow Guilty Spark as he holds off the Brutes alone - fading to a final gameplay segment.[4]

The final cutscene of the game then shows Master Chief running to escape the collapsing Ark structure before being swallowed in a bright light. The scene then transitions to the interior of the Torres Vedras (the name for what would be later named Cairo Station in final release), with Master Chief being awarded a medal by Lord Hood. Several strike fighters begin deploying fireworks outside the station and the crew applause. As the Master Chief looks out over Earth, he shares a few words with Johnson before Johnson departs and Miranda enters the frame. The cutscene ends with John-117 and Miranda Keyes watching over the Earth from orbit as the Covenant fleet prepares to leave the system.[4]

A final cutscene would have then played, showcasing the Arbiter's point of view on the collapse of the Ark, with the Elite stepping into the Ark's data vault amidst the installation's collapse - following the Monitor. The collapsing structure begins to send shards of rock tumbling toward the sarcophagus in the middle of the room, impacting the floor and causing a wave of dust to be emitted into the air. The Arbiter searches for the monitor, only to stumble upon the sarcophagus' now-open interior and inside it, a human skeleton - the implication being that the Forerunners were humans long ago. To escape the crumbling vault, the Arbiter then grabs onto Guilty Spark, and is flown to safety with the cutscene fading to white in a similar manner to that of Master Chief's. The cutscene then transitions to the interior of a Covenant carrier, with the Arbiter walking down the hall to join Rtas 'Vadum in the viewing deck - looking out over Earth. The two exchange a few words, and the cutscene ends with the Arbiter laying his arm over the Special Operations Commander's shoulder and a fade to credits.[4]

In these early drafts of Halo 2, the game's after-credits tease cinematic was intended to be the same as the one featured in the final game - even despite Bungie's intentions to move onto a new non-Halo game entirely. The cutscene, depicting the Flood overtaking High Charity and Cortana being trapped with the Gravemind, was always intended.[2]

Earth Ark - and the original Halo 2 ending as a whole - did receive some development and gameplay prototyping internally, though ultimately had to be cut due to the development hell which Halo 2 went through to reach ship. As of 2016, composer Martin O'Donnell still has the original script and voice lines written and recorded to support the ending.[5] Due to the ending being cut down, Halo 2 received backlash from the fanbase as a whole, with the game being infamous for the abrupt conclusion to the game. As such, the events surrounding Earth Ark would be kept shrouded in mystery predominantly until the 2020 release of many of Halo 2's storyboards by artist Lee Wilson.[6]

Despite being cut, many elements of the original ending of Halo 2 were later reused as inspiration for Halo 3. The concept for the Ark on Earth (itself based on a structure concepted and modelled by Marcus Lehto during the early production of Halo: Combat Evolved) was repurposed in Halo 3 for the portal structure around which the first half of the game is set. The Master Chief's peril aboard the Forerunner ship was later made the subject of the comic series Halo: Uprising, while the Master Chief using a Forerunner door as a heat shield to land on Earth would be directly used in the opening level of Halo 3. The Master Chief's emergence from the dust behind the Marines would later be seemingly reused in the Halo 3 announcement trailer.

A screenshot published in The Art of Halo: Creating a Virtual World, page 31, showcases a Jackal Major inside a Forerunner environment with the book's caption labelling it as an environment on Earth. It is possible that this screenshot was taken in the cut Earth Ark level geometry.[7]

Dialogue for this ending to Halo 2 was recorded by several voice actors, including Keith David. Dialogue files extracted from the Halo: Reach DLC tag build show David's voice sessions for the game, including a few lines intended for these levels. They are as follows;