For the unlockable objects found in various campaigns, see Terminal.

Terminal is a fairly large asymmetrical multiplayer map in Halo 2, included in the original game as part of the Maptacular Pack and in the Master Chief Collection port for Xbox One.

Situated in a stretch of pre-war torn downtown New Mombasa, the Liwitoni MagLev station provides the central setting for Terminal. Long gone are the citizens, who would regularly partake in lunch, shopping and socializing amongst the towering skyscrapers and scattered palms. The people have fled in fear of the coming Covenant forces but plenty of danger remains – the city's high-speed MagLev commuter train has been badly damaged and now hurtles erratically through the transit system.[1][2] The station is littered with UNSC propaganda and other posters, while screens in the terminal display Channel 7. Additionally, advertisements for the Hog can be found in the map. There is a thunderstorm bearing resemblance to that found above the Portal storm found in Halo 3 missions Tsavo Highway and The Storm either to the north or to the south of the station, although the skyscrapers mostly hide it.

This map includes the Wraith as the default heavy vehicle for multiplayer.

In Terminal Station Level there are PA announcements to add a bit of realism to the map. The announcements, instead of being dry and generic bulletins, are in fact a relatively amusing source of "really cool, well written and well acted dialog" including in-jokes, Easter eggs, and Bungie references, and were written and acted by Bungie artist Mike Zak and designer Chris Carney - who were noted as being "VERY proud of themselves."[2]

To hear the announcements clearly enough you can stand on the ramp that goes from the raised area inside the terminal up to the station platform. Look at the column with the scrolling "*STATION CLOSED FOR MAINTENANCE*" sign. Just above that sign is an inclined setback. Jump from the ramp to the part of the setback just to the right of the megaphone (you may have to crouch jump to make it). It'll take a few tries, but once you land there without slipping off, you stay there. Now the announcements are loud and clear. The best sound quality can be had by looking towards the map of New Mombasa near the floor.

Or you can listen to the announcements themselves at the halo.bungie.org Halo 2 Dialog database.

"Attention passengers: the Old Mombasa 4:18 is running several minutes ahead of schedule."

"A child’s My Pet Blind Wolf stuffed toy has been found. Will the owner please claim it at the lost and found."

"Will the owner of the brown Überchassis, license code P0-WND, please return to your vehicle."

"Thank you for riding with New Mombasa Transit. For any questions or concerns, please contact the transit hotline."

"All passengers are advised to wait in designated areas only."

"Upon request, all passengers are required to present their valid transit pass to Transit Authority personnel."

"Children must be monitored at all times. Do not leave children unattended in station."

"Smoking is prohibited at all transit facilities."

"The New Mombasa Transit Authority asks all customers to be aware of their surroundings. If you see any suspicious activity, or unattended packages, please call the New Mombasa transit security hotline"

"Possession of firearms at any transit facility is a federal offense."

"Warning: for safety and comfort, passengers should be in good health, and free from heart, back, or neck problems, motion sickness, or other conditions that could be aggravated by high-speed rail travel."

"Please be aware of incoming trains, and stand clear of the tracks until trains have come to a complete stop."

"Due to security restrictions, the following stations will not be in service until further notice: Liwitoni, Kilindini, Manyimbo, Nyali, Mtongwe. We appreciate your patience."

A map of Terminal

In CTF, It's a good idea to attempt to draw the enemy with the flag onto the tracks so you don't waste your ammo.

In a capture the flag match, it would be best if you are attacking, to jump into a Warthog (a Gauss Warthog) and get a gunner. Do not wait for other teammates to get in the passenger seat. Instead of going up the ramp, go in between the ramp, and the train wall, and take out the Wraith as quickly as possible. It does not matter if nobody is in it. Just destroy it; this will help your team a lot.

An excellent game mode to try is slayer with Brute Shots and carbines. The map has a excellent variety of open ground and elaborate buildings that are excellent for such a game style. While the Wraith is inadvisable, Ghosts provide an interesting touch. 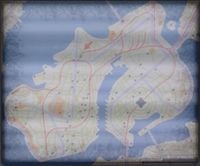 The map of Mombasa created for this level, rendered obsolete with the release of Halo 3: ODST.