This article is about the terminals in the games. For the terminal devices, see Z-9930 Information Vector Console. For other uses, see Terminal (disambiguation).

Terminals are objects found in Halo 3, Halo: Combat Evolved Anniversary, Halo 4 and in Halo 2: Anniversary. Conceptually based upon similar terminals in Bungie's earlier Marathon game series, the Terminals fill the player in on the Halo backstory.

The exterior of a Halo 3 terminal.

The Terminals in Halo 3 are in textual format, similar to the Terminals in Marathon. They are a continuation of the Iris alternate reality game used as viral marketing for Halo 3. They clarify a great deal of the Iris storyline by naming the authors of different messages and by explaining the circumstances of the original firing of the Halo Array. The Terminals follow the stories of the Librarian and the IsoDidact, Forerunner logs of the Flood attacks, and Mendicant Bias's progression into rampancy. 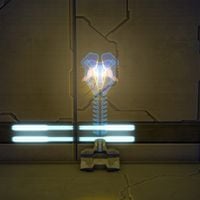 A terminal in Anniversary.

The Terminals in Halo: Combat Evolved Anniversary feature fully-animated cutscenes instead of text like in Halo 3. Most of them are logs narrated by 343 Guilty Spark and expand on the history of Installation 04. They also have connections to the stories of The Forerunner Saga and Halo 4.[1]

A Terminal seen in Halo 4.

The Terminals return within Halo 4, and they feature fully-animated cutscenes, like the terminals in Anniversary.[2] The terminals are presented as fragments of information from the Domain, which recapitulate the events mentioned in The Forerunner Saga. They follow the Librarian and the Didact from their time together during the human-Forerunner wars to the Didact's fall from grace and imprisonment inside the shield world Requiem.

The terminals featured in Halo 2: Anniversary have connections to the story of Halo 5: Guardians and center around the story of Thel 'Vadam, the contemporary Arbiter.[3] [4] These terminals are presented from three unique perspectives: target profiles compiled by LT. Jameson Locke regarding 'Vadam and his military campaign against Humanity, conversations between Sesa 'Refumee and 343 Guilty Spark concerning the Sangheili under the Covenant religion, and a Covenant record assembled by a San'Shyuum scribe pertaining to the role the Arbiters have played throughout the history of the Covenant.