Coagulation is a multiplayer map in Halo 2. A remake of the Halo: Combat Evolved multiplayer map Blood Gulch, it features a large valley with identical bunkers at both ends. It is ideal for Capture the Flag games due to its wide open spaces and having one base at either end of the map. This map is best suited for matches between six and sixteen players due to its size. Coagulation was remade as Hemorrhage in Halo: Reach and as Bloodline in Halo 2: Anniversary.

During the Battle of Installation 05, the UNSC Coral Sea conducted extensive scans of the ring, recovering data about many locations including the canyon that would become known as Coagulation. The UNSC's current theories surrounding this canyon's twin outposts suggests they were used by young Forerunner Warrior-Servants seeking to prove their prowess in combat arenas. Although naval strength or superior weaponry resolved most Forerunner conflicts, ancient warrior principles did advocate for close-quarters combat from time-to-time.[1] 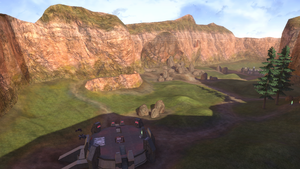 Coagulation as viewed from above.

The Red and Blue bases are both identical in layout and the weapons that they contain. Each has a single main room which contains the flag in CTF matches and bomb in assault matches respectively, as well as a newly added cellar level containing a Banshee and a gravity lift to the main room. The roof is also useful with a hole to drop into the main room, a teleporter, and a sniper rifle.

The first sniping spot is a small outcrop near the blue base, informally called the Sniper Ledge. The easiest way to get there is by using a Banshee to fly up there and then drop out onto the outcrop, you can also use a Ghost's or a Spectre's speed boost to climb up the wall and on to the ledge. The ledge has a pillar on it, so it is protected from the front but is open to fire from the sides. There is another sniping spot on the wall left of the Red Base that you can also reach by a Banshee, Spectre or a Ghost, but this is unprotected and is on a very steep angle. You can notice it because it is on a flatter angle than the wall surrounding it. There are some more good sniping spots in a bunch of rocks where an Active camouflage is and around some trees where you are very well camouflaged (near the rocket's ammo). A good game winning tactic is to use the Ghost to get to the Rocket Launcher, pick it up, and then use the Ghost so that nobody can use the rocket against you.