alphamoon is the working title of a cut campaign level produced during the development of Halo 2. The level was set on Basis, the moon of the gas giant Threshold - the planet around which Installation 04 orbited. The level would have seen the player play as the Arbiter in an assault against a heretic camp on the moon.[1] 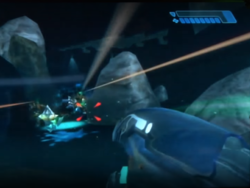 Gameplay of the alphamoon level in the September 2003 build of Halo 2.[1]

"We were building stuff that just couldn't be played, in any engine, we built, and detailed, and went a huge way down the path with a whole bunch of environments and levels for the game that just totally didn't make it. If you look at the level with the Flood, inside the quarantine area - that is the remaining 20 per cent of a gargantuan, sprawling level that was meticulously built and hand-constructed, but that could never, ever have shipped in any engine."
— Chris Butcher, discussing alphamoon.[2]

alphamoon was first revealed in a stream of the Halo 2 E3 demo, shown by Frank O'Connor and Brian Jarrard following Jarrard's chance finding of a Halo 2-era Xbox devkit with the build on it in his home. alphamoon is one of a number of levels included in this build. The level as presented in the stream is based in the Halo: Combat Evolved game engine, using the Combat Evolved HUD, plasma rifle, and plasma pistol - though the Unggoy and Sangheili art assets featured are their Halo 2 incarnations. The level is from early Halo 2 development and is not optimised, resulting in a very low framerate while playing.[1] Level geometry found in an early prototype created by David Candland for Halo 2's cut Theater mode showcases a small section of level geometry - prominently including a Zo'op-pattern Weevil cannon intended as an objective for the player to destroy.[3] This original alphamoon geometry was later described by Chris Butcher as a "gargantuan, sprawling level" that could have never shipped.[2] 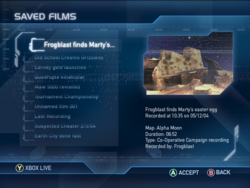 A screenshot of Candland's Theater prototype, with an alphamoon saved film selected.[3]

In the level dialogue, the Arbiter is referred to by the title of "Dervish".[1] This name was the original title for the Arbiter in Halo 2 development, but was ultimately changed to avoid being unintentionally offensive to Muslims.

alphamoon was originally set on Threshold's moon Basis and would see the Covenant confronting the Heretics.

At one point in development, the level was considered for use as some sort of demo, seemingly with a contest attached to its completion.[4]

In addition to the gameplay featured in the September 2003 build of Halo 2 alongside the E3 demo, a number of storyboards released online by Lee Wilson showcase an alternate ending to the mission which would become The Oracle in the final game, likely intended from prior to alphamoon becoming alphagasgiant.[5] These storyboards showcase an encounter between the Arbiter and the Heretic leader Sesa 'Refumee similar to that of the gas mines, but instead taking place in the wreckage of the control room of Installation 04. The storyboards showcase a struggle between 'Refumee and the Arbiter, with both stopping their fighting as 343 Guilty Spark enters the room. The two would begin listening to Spark, only for the crack of a carbine to interrupt Spark, and the camera pan down to showcase the Heretic lifting a blood-soaked hand from his chest. The shooter would then be revealed to be Tartarus, who subsequently captures Guilty Spark and then executes the now-injured heretic leader before walking away. 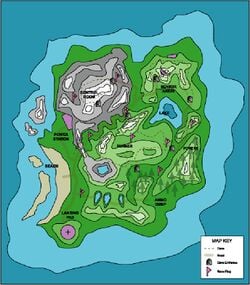 An early design document of the Burial Mounds, with several influences present from the alphamoon layout.

The level is set in a heretic camp on the moon of Basis. While this concept did not make its way into the final Halo 2 campaign, this idea is the basis for the setting of the multiplayer level Burial Mounds. Ultimately, several ideas from the early stages of this level's development were present in early Burial Mounds iterations such as the Control Room structure (detailed in the storyboard selection above), though the initial sketches produced by Max Hoberman were deemed too intensive for the two-man team assigned to the level - leading to the map's layout being redesigned by Chris Carney into the iteration seen in the final game.[6][7]

Roughly 20% of the geometry developed for alphamoon was later reused in the final game in the end zone of Sacred Icon and the later Quarantine Zone.[8]

Due to the in-development nature of the level, the subtitles and spoken dialogue do not align 1:1, and are as-such noted in the transcript. As well, known dialogue comes from the 343 Stream[1] as well as remaining files left in the Halo 2 Editing Kit.[4]

The player spawns equipped with a Okarda'phaa-pattern plasma rifle and a Type-25 plasma pistol.[1]

If used as a demo, the level would have ended with the following text.[4]

"Stand by to see if your[sic] a winner!"