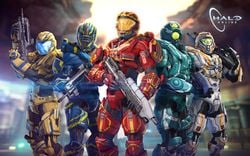 Some of the armor variants in Halo Online. 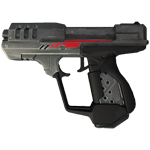 Armor customization in Halo Online would have allowed players to customize their Spartan and Elite player model. Individual armor pieces could be purchased with in-game currency similar to Halo: Reach.

Below is a list of armor by the build of Halo Online they were in.

This is a list of armor that was seen in the Halo Online Announce Trailer, with notes about them.

This is a list of armor descriptions that was found in the code of the Alpha of Halo Online.

Below is a gallery of armor found in the alpha build code.

This is a list of armor that was found in the Alpha of Halo Online.

This is a list of armor that was available in the Beta of Halo Online.

Elites were in development for Halo Online, however were not finished by the time of the games cancellation. Here is a gallery listing some of the unreleased Halo Online Elite armor.

Concept art for various armor permutations that were to appear in the game.

Resurgence in The Master Chief Collection[edit]

On December 2020, it was announced Series 5: Anvil on Halo: The Master Chief Collection would include twelve armor sets that originally were designed for Halo Online; these armors were added into Halo 3 on January 2021, under the canon explanation of being prototype GEN2 armors being tested on Anvil Station in the first months after the end of the Covenant War. This is the list of the Halo Online armors added into Halo 3 by Season 5:

In the trailer for Season 5's content, four armors that weren't included in the season were shown: Operator, Infiltrator, Nomdagro, and a set using the "Ghost" armor design.