Olympia Vale: "Those strange dinosaur-looking creatures?"
000 Tragic Solitude: "In your tongue it means 'blind wolf', though it has been some time since humans have encountered them."
— Installation 00's monitor explains morolaath to diplomat Olympia Vale.[1] 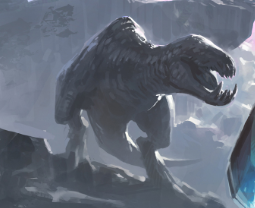 At least some of the morolaath encountered on Installation 00 in early 2555 were under the influence of its monitor, 000 Tragic Solitude.[2]

Morolaath ("blind wolves" in English) are predatory creatures found on various Forerunner installations.[1][3] Known to humans in the ancient past, in the modern era operatives of the United Nations Space Command have observed morolaath on Installation 00 and at least one Halo ring.[1][3] They are formidable pack hunters that primarily rely on sound to direct their attacks.[1][4]

"If I were to guess, I'd say that many of the species on this installation had been predisposed to attacking us because of their genetic disposition. When the monitor—this Tragic Solitude, as it called himself—bred these creatures, it must have done it with particular genetic triggers that it could control through some impulse or neural communication system."
— Doctor Luther Mann reaches a conclusion about the behavior of morolaath and other creatures encountered on the Ark.[2] 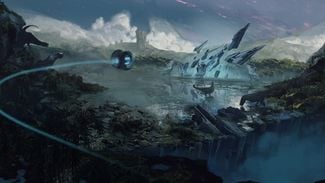 In the distant past, morolaath were known to ancient humans and were among the creatures preserved by the Librarian against the firing of the Halo Array in 97,445 BCE.[1][5][6] Following this destructive event they were seeded upon at least one Halo installation while also being left to flourish on the Ark, Installation 00, far beyond the Milky Way galaxy.[1][3]

In December of 2552 an unfinished Halo ring was fired above the Ark, spelling death for the many sentient creatures which inhabited its surface.[7][8][Note 1][9] The Ark's monitor, 000 Tragic Solitude, eventually then began to breed new life forms.[2] Among these were more morolaath, at least some of which the monitor imbued with particular genetic triggers it could control through some impulse or neural communication system. In this way they were made servile to him but also predisposed to attack any future interlopers Solitude did not expressly allow to pass by them unmolested.[2] In March of 2555 a team of humans and Sangheili representing the United Nations Space Command and Swords of Sanghelios, respectively, encountered a pack of six morolaath shortly after traveling to the Ark.[4] The group managed to escape detection at first, but the appearance of chaefka created a commotion which drew the morolaath to join the ensuing struggle.[4] Those that survived were chased off, but a couple of them returned shortly thereafter only to be discouraged from further violence this time by an animal which resembled a large gomphothere or mammoth.[10] One other pack was encountered during that particular mission on the extragalactic installation, but it retreated under a barrage of gunfire.[2]

Morolaath were later observed on at least one Halo installation and footage of them was obtained by OQ-45 Honeybee drones and broadcast to Earth for viewing by those in attendance at an Outpost Discovery.[3][Note 2][11][12] When the Office of Naval Intelligence's Materials Group designed the HRUNTING/YGGDRASIL Mark I [J] armor defense system, it was equipped with sonic emitters meant to specifically repel morolaath.[13] 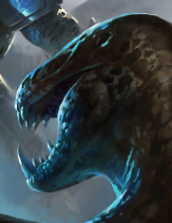 Morolaath are covered in scales.[14]

With several variations known to exist,[15] morolaath somewhat resemble carnivorous theropod dinosaurs, being bipedal with three clawed toes on each foot.[3][4][10] Unlike theropods, however, they possess neither eyes nor arms.[4] Morolaath have gargantuan fangs which extend from the bottoms of their jaws and nasty-looking teeth which line the tops. Their nostrils, situated at the tips of their snouts, are flared to check the air. It is hearing, however, that morolaath primarily rely on to perceive their surroundings;[15] they are able to react to relatively loud sounds from some distance away and also take notice of something as quiet as a human sighing from ten meters away.[4][10] They make low growling sounds and are also capable of roaring or making howling noises which sound eerily like those of wolves.[2][4][10]

Morolaath have long tails and their legs are powerful, allowing a small group to make the ground rumble when running at high speeds and affording them the ability to leap through the air.[4][10][14] Their strong, wide jaws are capable of tearing a man's head from his body.[4][10] Certain parts of their anatomy are more susceptible to injury than others, and a few rounds from a rifle fired at point-blank range through one's mouth and out the back of its head is enough to kill it.[10]

In addition to their lack of vision, morolaath are likely named for their howling.[1][4]

Morolaath are predatory carnivores which hunt in small packs led by an alpha.[1][4] While hunting they have been observed slowly striding toward potential prey with their heads low to the ground, sweeping them from side to side like conning towers. When noise signals the presence of a target they may bolt toward it, only to slow up with confusion or irritation should it move silently away in time. This change in emotional state manifests itself through random snapping of their teeth in the air or howling.[4] When speeding in for an attack morolaath may clack their jaws together.[10]

Morolaath can be readily keyed to specific hunting ranges, and their acute senses make them well-suited as a "tripwire species" for detecting early Flood infestation and incursions by unauthorized sapient parties.[15] While multiple variations of morolaath have been encountered, they are all territorial apex predators that closely guard areas important to them, such as riverbanks they must needs drink from.[2][15] Those that encroach on these locales may find themselves set upon by the pack which claims it.[2] Those on Installation 00 that were bred by 000 Tragic Solitude were especially imbued with a genetic predisposition to attack others while the monitor was in control.[2] The pack mentality of morolaath can be overridden by fear, in which case a larger or more intimidating creature can cause a pack to retreat and slink away rather than engage it.[10] Prolonged gunfire is especially like to upset them, leaving them disoriented as they scramble about to locate targets amidst the cacophony while also being shot.[10] 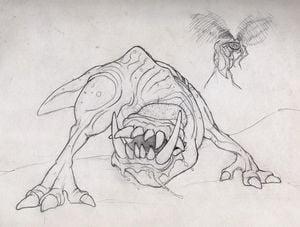 This image show's Marcus Lehto's original sketch of the "blind wolf" and its insectoid companion.[16]

Shi Kai Wang: "Look, it's the blind wolf!"
Marcus Lehto: "Big, beloved blind wolf."
Shi Kai Wang: "That was back when you could ride it."
Marcus Lehto: "Yeah, yeah. You could actually mount the thing and ride it. A.I.... A.I. couldn't, uh... Couldn't handle it on the A.I. side. Couldn't flock 'em, couldn't, uh... fit them into gameplay."
— Marcus Lehto, Halo: Combat Evolved art director, and Shi Kai Wang, a concept artist, discuss the attempts made to include "blind wolves" in the first Halo game.[17]

The "blind wolf" was a creature designed by Halo: Combat Evolved art director Marcus Lehto to be included in that game.[17][18] According to that early design, a blind wolf would have a symbiotic relationship with some kind of insectoid creature.[19] This "bug" would plant its stinger at the base of the wolf's cranium and in this way allow it to see through the eyes of the bug.[20] Then, when the blind wolf caught and killed its prey, the bug would be permitted to share in eating the carcass of whatever had been killed.[19][20] Not only would blind wolves exist in groups in some environments of the game, but they were planned to be able to be ridden by the player's character.[17] Ultimately, they had to be cut from the game because of problems with artificial intelligence.[17] In Halo 2, the blind wolf was referenced by an ambient announcement on the multiplayer map Terminal.[9]

In 2007 a Halo massively multiplayer online game being worked on by Ensemble Studios was cancelled.[21] Called Titan and set during the time of the Forerunners, one known piece of concept art for the game shows a creature referred to in the artwork as a "jaggmaw sailtail" which bears a strong resemblance to the blind wolf cut from Combat Evolved.[17][21][22] The jaggmaw sailtail is drawn as a an eyeless bipedal carnivorous creature lacking any form of forelimbs, but unlike the blind wolf it bears notable protrusions along the dorsal surface of its tail. The largest of these is used in the imagery to mount a seat occupied by a Jiralhanae rider.[21] When a Halo-themed texture pack was released for Minecraft in 2014, it allowed horses in the game to be re-skinned to resemble "blind wolves".[23] The blind wolves were formally introduced to canon the following year in the novel Halo: Hunters in the Dark, where they were also first identified as morolaath.[1]