This article is about the in universe event. For the real world event, see Halo: Outpost Discovery. 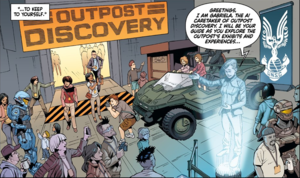 Outpost Discovery is an exploratory initiative launched by the United Nations Space Command in the days following the conclusion of the Human-Covenant War. The initiative acts as an educational tool and mobile recruitment station aimed at inspiring and training the next generation of UNSC personnel. The primary goal of the outpost is to protect humanity by arming them with knowledge of their own history – from their enemies and heroes, to their triumphs and tribulations. Outpost Discovery travels across Earth, stopping in major population centers and inviting average citizens to explore the legacy of humanity’s survival and experience the thrill of being part of the UNSC’s first line of defense against whatever threats still lurk in the galaxy.[1]