Cortana starts the countdown for the self-destruct as John-117 looks on aboard the UNSC Pillar of Autumn.

The self-destruct is an integrated mechanism present in starships and UNSC military bases and is used to cause a massive explosion to completely destroy itself in order to prevent vital navigational data and strategically-valuable information from falling into enemy Covenant clutches, as per paragraph five of the Cole Protocol. Self-destruct mechanisms are also employed by the Covenant and Banished in their citadels and Banished outposts.

Severely damaged during the Harvest campaign, the UNSC Prophecy was boarded by teams from the UNSC Spirit of Fire to purge its navigation database as per the Cole Protocol. After Sergeant John Forge succeeded in purging the navigation database, the ship's self-destruct was initiated by its AI FitzGibbon to keep the ship out of Covenant hands.[1]

Towards the end of the Battle of Installation 04, Cortana and Spartan John-117 were forced to activate the UNSC Pillar of Autumn's self-destruct sequence in an effort to prevent the Flood parasite from getting off of Installation 04, and particularly keeping 343 Guilty Spark from firing the Halo and wiping out all sentient life within a radius of 25,000 lightyears. Cortana and Master Chief's plan would have successfully worked had not Guilty Spark aborted the self-destruct sequence, and as Cortana was unable to reactivate the countdown, so the Chief proposed using explosives to cause the fusion reactors to go critical and explode, thereby destroying the ring.[2] 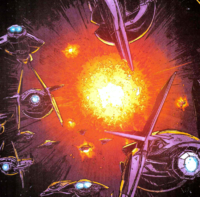 The UNSC Remote Scanning Outpost Fermion was forced to enact paragraph five of the Cole Protocol and had to flood the station's reactors with deuterium, causing a critical overload in order to destroy the station's science library, which was offline for repairs.[3][4]

UNSC The Heart of Midlothian[edit]

When the destroyer UNSC The Heart of Midlothian was captured and boarded by the Covenant, the ship's AI, Mo Ye, told Sergeant Michael Baird to go to the bridge to reconnect Mo Ye to the rest of herself and the ship in order to enable the self-destruct and destroy the ship along with its data and all the Covenant aboard. The Heart of Midlothian's self-destruct occurred by shaped nuclear charges detonating inward and igniting the fissionable material in the ship's reactor, causing a greater explosion that destroyed the surrounding Covenant ships.[5]

During Operation: FIRESIDE, the Forerunner construct the Knowing self-destructed on the orders of Dutch and Romeo as Reclaimers in order to keep the construct out of Covenant hands.[6]

After getting half of the Janus Key, Jul 'Mdama activated a Flood containment protocol[7] on Requiem that effectively acted as the planet's self-destruct. As a result, Requiem was set on a course into the Epoloch system's star. Jul's forces fled the planet, but the UNSC Infinity was stuck because of the interdiction web anchoring the ship to Requiem. After the three artifacts creating the anchor were deactivated, the Infinity escaped at the last minute. Requiem fell into the star which went supernova moments later.[8]

In March 2558, the UNSC Infinity found the damaged freighter, Pilgrims' Pride, leaking atomic matter with faint life signs aboard. Infinity tugged the ship into one of its deployment bays. An ambush was sprung within the bay when the freighter set itself to self-destruct and multiple UNSC aircraft exited its cargo bay. Fireteam Majestic was deployed along with Fireteams Colossus and Fenrir to repel the attack and prevent the freighter from self-destructing inside the Infinity. The ship was ejected from the Infinity and exploded in space some distance away.[9]

While originally sent to reclaim the ONI space station Argent Moon, after a Covenant fleet showed up, Blue Team decided to scuttle the station instead by overloading the reactor to keep Argent Moon out of Covenant hands. However, although John-117 started the overload, a containment protocol was initiated to cool the reactor and prevent it from melting down. Blue Team followed the reactor to an outside area where coolant would be pumped to the reactor to prevent the meltdown. Blue Team exposed the coolant pipes and then destroyed them with Banshees, fighting off Covenant interference. With the cooling system destroyed, the reactor melted down unimpeded. Blue Team escaped in the ONI Acrisius, a Winter-class prowler in Argent Moon's docking bay while the explosion destroyed all nearby Covenant ships.[10]

The UNSC Silent Claw took heavy fire during its run on Salvation Base and the Spartans were forced to bail from the craft before it crashed violently into the ground. Fred-104 instructed Damon to send the signal that would trigger what remained of the ship to self-destruct.[11]

During the Skirmish over Netherop, the Shipmaster of the Covenant frigate Radiant Arrow activated the ship's self-destruct after it was boarded by SPARTAN-II Blue, Green and Gold Teams. The Shipmaster depressed a dead man's switch to give his crew time to abandon ship before detonating it. As the rest of the Spartans fled the ship, John-117 attempted to stop as many of the crew escaping as possible. With his last breath, the Shipmaster released the dead man's switch, causing the Radiant Arrow to explode. However, John was able to escape using one of the ship's escape pods and only the Radiant Arrow's crew died in the explosion.[12]

After being shot down during the Battle of Seoba, the Prowler UNSC Starry Night had its self-destruct, a one-megaton Fury tactical nuclear weapon in the engineering compartment activated by Linda-058. The self-destruct took out the Starry Night and the Covenant intrusion corvette that tried to capture it.[13]

In order to save his people, Dr. Chen Bax decided to sacrifice himself to use the UNSC Promise of Dawn's self-destruct to set off an avalanche that would wipe out most of the Covenant's ground troops. After Linda-058 was away and he had told his followers where to find the nav unit for their ship, Chen set off the self-destruct with a remote, creating the avalanche and saving his people at the cost of his own life.[14]

During an insertion to Netherop during the Battle of Netherop, the Razor-class prowler UNSC Night Watch was shot down by forces from the Flotilla of Unsung Piety. In order to keep the Prowler and its technology out of enemy hands, Lieutenant Commander Amalea Petrov armed the ship's self-destruct, a Fury tactical nuclear weapon and set it to be remote-detonated. The ship's crew worked to get as far away as possible before the detonation, with Frederic-104 clearing a culvert of the danger of avalanches burying the survivors taking cover there. As the Covenant began launching their aircraft from the crash site, Petrov activated the self-destruct and ensured that no Covenant who had been aboard the vessel got out alive to report on what they found. However, while the Prowler crew was safe, two of the Castoffs who had gotten too close to the blast site were killed.[15]

During the Battle of Netherop, with no chance of getting off Netherop in the UNSC Phyllis Wheatley, the salvage ship's self-destruct was activated once all of the survivors had been lifted clear by Pelicans.[15]

After the UNSC Special Delivery was shot down on Reach during Operation: WOLFE, its octanitrocubane self-destruct charge was was triggered by Major Eznik Van Houte, using the vocal trigger command "Execute".[16]

Cortana attempted to blow the engines of the UNSC In Amber Clad in an effort to stop the Flood and to keep the Covenant from firing Installation 05, but was kept from doing so when the Gravemind captured her.[17]

During the Skirmish on Infinite Succor, Special Operations Commander Rtas 'Vadumee attempted to activate the ship's self-destruct due to the vessel being overrun by the Flood. However, the Minister of Etiology disabled all of the Infinite Succor's primary systems to keep the Flood from accessing them. Instead, Rtas was ultimately forced to plot a slipspace jump into the Soell system's local star in order to destroy the Infinite Succor.[18]

After detecting the presence of Spartan-III Owen-B096 in the cockpit, the Sundered Legion Prowler activated its self-destruct with a ten second countdown. However, when Dorian Nguyen accidentally hit the cockpit with his hand while trying to get out, the Prowler identified him as his presumed great-grandfather Quinn Butain based off of Dorian's DNA and allowed Dorian to override the self-destruct.[19]

During the Battle for Tribute in 2552, the Ceudar-pattern heavy corvette Supplication of Purity was destroyed and crashed into Tribute. The ship was able to survive the crash mostly intact, and several key components were later salvaged by the Office of Naval Intelligence. These components were later swept for dangerous material and assigned for display at Outpost Discovery. However, ONI were not thorough in their check, and a Covenant AI was able to hide inside a section of the ship containing a maintenance deck. The AI was suppressed by Gabriela, though it was able to initiate the corvette's self-destruct. However, the self-destruct was disabled before it could vaporize the event.[20]