Veta Lopis: "Maybe your A.I. can give us a rundown on the operation?"
Damon: "My name is Damon. I wish you would remember that."
— Damon asks to be recognized as an individual.[3]

Damon was a fifth generation "dumb" Class-L military artificial intelligence assigned to work with the Spartan-II, Frederic-104, in late 2553.[1][3][4][5] Damon assisted Fred throughout Operation: RETRIBUTION, accompanying him during missions to Venezia, Taram, Gao, and Meridian.[1] It was on Meridian that Damon was severely damaged when Fred was run over by a load, haul, dump machine controlled by the survivors of a rogue Office of Naval Intelligence unit, Papa-10.[6] Though Damon's data crystal was cracked, efforts to recover the A.I. were initiated as soon as possible.[2] It is unknown if they were successful or not.

Damon's programming was completed on November 23, 2553 at around 1419 hours.[1] Damon was created under the direction of Rear Admiral Serin Osman to assist Fred-104, who was ordered to have his neural lace upgraded so that his armor could store an enhanced A.I. that would be able to interface with him. By December 12, Damon and Fred had been acquainted for less than two weeks. It was on this date that Fred and the other Spartans of Blue Team participated in the first stage of Operation: RETRIBUTION on Venezia. Damon was present for the surface op which resulted in the successful of elimination of black market crime boss Georgi Baklanov and the arrest of gunrunner Ross Nyeto. Upon returning to the UNSC Silent Joe, the Sahara-class heavy prowler that had gotten the team there, Damon could tell that Fred was wondering whether they were ready for for more action. The A.I. preemptively displayed readouts for each Spartan's armor and offered an analysis concerning the battle-readiness of each. Fred advised against reading his mind like that, at least until they got to know one another better, as he found it extraordinarily creepy. Damon begrudgingly agreed to refrain from doing so in the immediate future.[1] 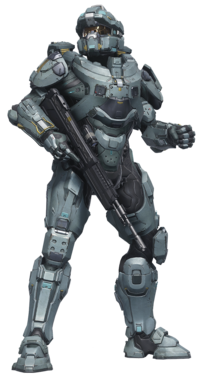 Damon was designed to work with Fred-104. Damon inhabited his CENTURION-class GEN2 MJOLNIR and interfaced directly with his brain via his neural lace.[1]

The following day, the Silent Joe arrived in the Shaps system in pursuit of a Mudoat starsloop that an undercover Ferret team led by Veta Lopis had secured passage on.[4] The purpose of following the Kig-Yar-crewed vessel was to discover the location of a primary base of operations for the Keepers of the One Freedom and to potentially rescue hostages the group was suspected of kidnapping. It soon became clear that the base they were looking for was located on Taram, a moon of Pydoryn. Blue Team was ready to insert via D102 Owl but was recalled to the situation room by Captain Piers Ewen before they could launch. It seemed that the Keepers had been alerted that something was afoot, making the mission much riskier. Fred vocally pushed back against the idea that the mission had to be cancelled because of this, which Damon noted had plainly irritated Ewen. Speaking across TEAMCOM for all three Spartans to hear, Damon said that Fred should apologize in accordance with protocol. A short time later, the A.I. offered condolences to him when it appeared that Lopis and the rest of her team had perished, as Damon had been able to tell Fred was fond of them. The captain eventually instructed his senior intelligence analyst to ping the Ferrets and in response, a transmission from Olivia-G291 stated that the situation on the ground was "dark and uncertain". Damon recognized that she was using a redundancy code to get a hidden message across. Damon estimated that there was an 83.3% chance that the Spartan-III was trying to say Dark Moon Enterprises was involved with what happened to the missing persons they were after. Fred passed on his A.I.'s suspicions, saying that Damon thought Dark Moon was behind their kidnapping, to which Damon sharply corrected him, saying that he had only said they might be involved.[4]

While the Silent Claw was halfway through its insertion run to land the Spartans, Damon intercepted a recall order that went out from Taram to the Keeper fleet ordering all vessels which had launched from Salvation Base to return.[7] Fred had Damon sync his HUD with the readouts from the Owl's cockpit. Since a quiet infiltration was almost certainly no longer an option, Fred declared they were going to plan Delta, which involved a more direct approach. Under his breath he muttered that he hoped they wouldn't have to revert to plan Echo, to which Damon stated that no such plan existed. Fred did not realize that he had been speaking out loud, so he verbally rebuked Damon for reading his mind, even though the A.I. had done no such thing.[8] The Claw took heavy fire during its run and the Spartans were forced to bail from the craft before it crashed violently into the ground. Fred instructed Damon to send the signal that would trigger what remained of it to self-destruct.[7]

Damon traveled with Fred during the subsequent stages of Operation: RETRIBUTION, which took them to the planet Gao the day after and from there to Meridian, a moon of Hestia V.[3][5] It was December 16 and both Blue Team and Veta Lopis' Ferrets were tracking a group of Jiralhanae Keepers and an ONI team that had both disappeared into the depths of an abandoned mine when Veta suggested that Fred's A.I. could given them a rundown on what had used to be the Jenny Lynn Tantalite Mine prior to the moon's glassing. Damon explained the layout of the caverns in great detail, stopping once to make sure everyone was keeping up before going forward. Fred eventually told Damon that no more information was necessary when asked.[3] Damon also proved to be useful within the mine due to their ability to identify specialized tools the teams came across and through providing a legal explanation for the state things were found in.[6] In fact, it was because of Damon's knowledge of UEG Mine Safety and Health Administration regulations that Fred determined the Keepers in the mine were searching for explosives. A powerful pressure wave threw everyone off their feet at one point, and Damon suggested the blast had come from a gelignite packet that had been converted to a makeshift grenade. When the teams caught up to both groups they had been following, the survivors of ONI unit Papa-10 made it clear that they were a rogue element that would not come quietly with Veta and the Spartans. Without warning, the three of them drove a massive ten-ton load, haul, dump machine right overtop of Fred, inuring him and knocking out a number of his suit's capabilities.[6][9] While Fred was being run over, Damon's data crystal was cracked.[2] An irregular pinging in his ears signified that to Fred that the A.I. was having trouble rebooting.[9] Later that day, recovery of Damon was being worked on aboard the Silent Joe.[2]

Damon presented themself as a ghostly, hairless face that appeared neither male nor female and spoke with an androgynous voice.[1] Veta Lopis got the impression that Damon was smug and had a prickly personality. When she referred at one point to Damon as "your A.I." to Fred, Damon stated that they wished she could remember they had a name.[3] During Damon's time working with Fred, the A.I. thought it very efficient to read the Spartan's mind in order to anticipate queries before he actually asked them. It was also no trouble whatsoever to determine when Fred was lying. Damon was eager to make their partnership work as Osman intended.[1] Having Damon onboard made any necessary repairs or adjustments to his MJOLNIR much easier to make. Damon could, for example, prevent its fusion reactor from overheating in the event of catastrophic damage to it that risked such a process.[9]